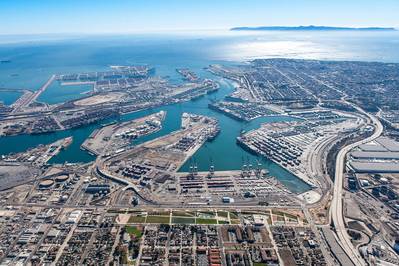 The following information was released by the Port of Los Angeles:

Because our facilitation of a safe and secure supply chain is top priority at the Port of Los Angeles, the incident involving an export-bound shipping container that exploded inside a marine terminal storage area here on October 30 is of paramount concern to the Los Angeles Harbor Department and Los Angeles Port Police. Preliminary analysis by the Los Angeles Port Police Hazardous Materials Unit, Los Angeles Police Department Bomb Squad and United States Coast Guard indicates that a form of combustible fuel or other compound was ignited in the sealed container. A thorough investigation continues.

The results of this investigation and recommendations will be reported back to the Board of Harbor Commissioners and the public.

The investigation determined that a 40-foot container was delivered earlier in the day along with 11 other containers from a recycling facility on Terminal Island. The containers were slated for delivery to Taiwan.

The involved container was not marked as containing hazardous materials and the manifest indicated clean scrap iron or heavy melting scrap only.

The remaining eleven containers were located, inspected and determined to be compliant by LA Port Police, LAPD Bomb Squad, US Coast Guard and CBP. The Los Angeles Port Police Hazardous Materials Unit is conducting a thorough investigation. Results will be reported back the Harbor Commission and public.

Procedures at the recycling facility will be reviewed by the Los Angeles Port Police, and the US Coast Guard will review their Facility Security Plan for which they have jurisdiction.