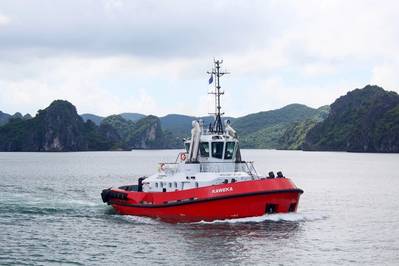 Napier Port is currently developing a sixth wharf which, at 350 meters long, will be capable of handling the larger vessels that are expected to access the port in the near future. As a key transport hub for the Hawke’s Bay region of the North Island, the port already hosts a wide range of vessels including container ships, cruise ships, cargo and timber carriers.

The ATD Tug 2412 Kaweka will join two existing Voith-type tugs at the port; the Te Mata and Ahuriri. Tractor tugs work best at Napier Port due to their ability to operate effectively in a swell, to tow indirectly, and their maneuverability, the last particularly important due to the tight berthing arrangements in the harbor. Just 24-meters in length but with 72 tonnes of bollard pull, the ATD Tug 2412 delivers just the combination of power but compactness that the Napier Port management team is seeking.

The short delivery time is due to the latest addition to the Napier fleet being available from stock at Damen Shipyards Song Cam in Vietnam.

Following fitting-out she will be delivered between October and November. After-sales support will include a full package of crew training and vessel familiarization.