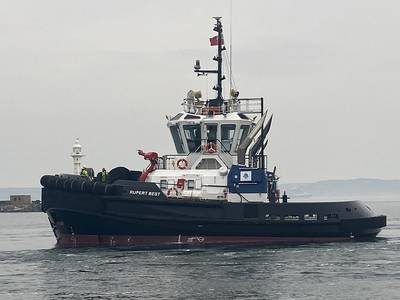 Portland Port in the U.K. said it has taken delivery of new tug Rupert Best.

Built in Turkey in 2019 to a Robert Allan Ltd. design, the Sanmar Sirapinar class ‘RAmparts 2200’ azimuth stern drive tug will increase and help support the port’s ability to welcome larger vessels. The tug has a bollard pull of 50t and her two Caterpillar engines deliver a total of 3,000 kw.

The port's harbor master and general manager – marine, Captain Mike Shipley said, "We have been planning this purchase for a while, so it was a great day when she arrived in the port. The Rupert Best will greatly enhance the port’s towage capability and means we are now able to offer three tugs each with a bollard pull of over 50t."

Rupert Best will be undergoing crew familiarization of systems and safety equipment as well as crew training prior to engaging in her first ship assist tow.

Senior tug master Andy Straw said, "We are absolutely delighted with her. She is very responsive and precise. With an LOA of 22.4 meters, she looks very compact, however, there is more space to her than it appears from the outside. She is well kitted-out both internally and externally and is a very capable tug. She is strong, highly maneuverable, and a welcome addition to our fleet of tugs."

The Rupert Best joins the port’s fleet of tugs which include the Maiden Castle, Rufus Castle and Wyke Castle, with the latter currently being up for sale.

The vessel is named in memory of the late Commander ‘Rupert Best’ who died in February.  Rupert was instrumental in persuading Langham Industries to buy the port from the MOD in 1996 and worked tirelessly to help it grow over 25 years.  An official naming ceremony will take place when it is safe to do so.

Portland Port CEO Bill Reeves said, "The port is lucky to have owners that consistently invest in the port’s infrastructure and assets, from berth extensions and dredging programs to our newest tug. The tug is a great addition to the port’s services and operations. We hope that in naming it the Rupert Best, it will be a fitting memorial for someone who spent many years at sea with the Royal Navy and played such a pivotal role at the port."