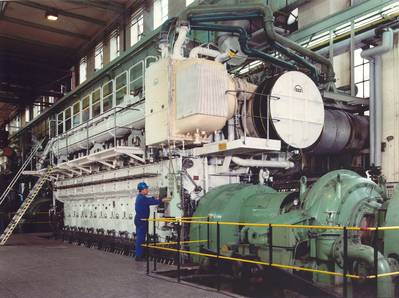 “2008 was generally still a very good year with impressive 8.4% growth. In autumn, however, gloom also spread to our sector, which has been so used to success in the last five years,” reports Dr. Alexander Nürnberg, chairman of the German Engineering Federation (VDMA) – Marine and Offshore Equipment Industries at the association’s press conference in Hamburg. “We had expected a consolidation of the  shipbuilding markets, which had been very overheated up to mid-2008. But no one could foresee the actual massive impact of declines in orders, project cancellations and business failures of major customers. Yet we are not putting our heads in the sand – precisely in this phase, we have to step up our R&D efforts significantly and plan for after the crisis. The global competition is not asleep, and we must become better and less expensive,” notes Nürnberg. “When the markets recover, we must be in good shape to maintain and expand our position as top export country for marine technology.”

German marine and offshore equipment suppliers achieved with 72,000 employees sales of €12.9 billion in 2008, 8.4% up on the previous year. The export rate was 75%. Production capacity utilization is still high at most companies, with throughput times for marine and offshore equipment suppliers averaging about a year. However, work for 2010 and 2011 is threatened, as there was a dramatic decline in incoming orders from autumn 2008, leading to a 17.7% drop in incoming orders for 2008 as a whole compared with previous year. This trend unfortunately continued in the first half of 2009. Along with the slump in new orders, there have also been cancellations, even leading temporarily to a negative trend in incoming orders at quite a few companies. Increased efforts in export markets The currently poor order situation should not be misunderstood as being a time when export markets can be neglected. In 2009, activities are increasing precisely in this field. With delegation trips initiated by the German Engineering Federation (VDMA) and supported by the Federal Economics Ministry, the sector is significantly  xpanding its position in the shipbuilding and offshore growth markets in e.g. South America and India and is also exerting a strong presence at regional specialist fairs, for instance the new SMM India or the established Marintec China. These events are used particularly by small or medium-sized suppliers from Germany.

Apart from the dominant three Asian shipbuilding countries China, Korea and Japan, new shipbuilding countries such as India and Brazil are coming to the fore. In 2008, a total of 2,928 (previous year: 4,851) oceangoing vessels were ordered worldwide, including 510 (606) in Japan, 557 (1,231) in South Korea, 951 (1,700) in China and 209 (422) in the EU-27, with 34 (61) in Germany. World orders on hand for vessels surged again last year, rising from 10,055 to a record 11,341 units. However, this total slumped to 11,056 up to the end of the first quarter of 2009 and has been declining continually since then. China still largest foreign market 38% of German suppliers’ foreign business was accordingly accounted by Asia and 37% by other European countries in 2008. China is the largest foreign market (23.5% of foreign  orders), trailed by Korea (12.7%). However, Korea is currently gaining in terms of market share, as the local shipyards are less affected by the current cancellations than the German or Chinese. German marine equipment and offshore suppliers are concerned by increasing protectionism in some customer countries. After the “Buy American”, the effects of the new “Buy Chinese” policy on public orders are still not clear. “Protectionism, as the past has shown, is the wrong way to counter the crisis,” said Mr. Nürnberg.

The increasing involvement of German suppliers in the offshore oil and gas industry, which has been far less affected by the current downturn, is now paying off. According to experts, in the long term raw material prices should return to their recent high level and the boom in this segment will continue. Hence the global investments in technically sophisticated solutions continue to represent an ideal business area for German suppliers. A delegation trip to Brazil that ended very successfully a few days ago was obvious proof of precisely this potential. The key role that the investments of the offshore sector now play for the shipbuilding industry is also particularly clear in Brazil. German suppliers are responding flexibly to these market opportunities and thus offsetting as best as they can current losses in other areas.

A further focus of German suppliers is the energy- and cost-saving and at the same time environment-friendly operation of ships and offshore rigs. Here the German high tech industry has to defend a top reputation with its technological edge in order to create employment in Germany with state-of-the-art and practically oriented products and systems that can hold their own against the global competition. That applies for the development of the “clean ship” and for mining raw materials at great water depths as well as energy generation with offshore wind power plants in deeper waters. A promotion of these developments by the federal government was confirmed at the last National Maritime Conference and in direct discussions with industry on research projects. “Close cooperation between business, politics and science is called for when it comes to developing new market segments,” explains Dr. Lüder Hogrefe, managing director of Kieler Raytheon Anschütz GmbH. “With teamwork, our safety and environmental requirements must result promptly in new products for the global market.”

Many marine equipment suppliers are confronted by a dilemma: according to strict business management principles, it would now make sense to lay off staff, but on the other hand firms see themselves responsible for their personnel and are aware of the advantages of having qualified engineers and skilled workers in the medium and long term. Companies have thus had to cut back in their temporary workers. Fixed-term contracts are in some cases not being extended. A recent VDMA survey shows that over half of firms (54%) also expect to have to reduce their core workforce in 2009. However, nearly half (41%) of companies plan to take on the majority of their trainees. And the offer of traineeships in the coming training year will stay constant in close on three-quarters (73%) of firms. “However, staff councils and managements of small or medium-sized companies must together find ways of continuing to ensure the flexibility of their firms in the future,” adds Dr. Christian Schliephack, managing director of REINTJES GmbH (Hamelin) “as that is our competitive advantage in the global market.”

It is important to note that only 8% of companies expect a reduction in engineer positions, while over three-quarters anticipate no change in their share of engineers and 16% even predict growth.

“We will have a hard lean period ahead of us in 2010 and probably also in 2011. Companies are now bracing themselves to cope in every way they can. We will be trimming production costs, sharpening our technological edge and refining our range of services. We are confident about our prospects in the long term: we will be expanding our position in new markets and after weathering the crisis will thus be able to take good advantage of the recovery in the world market,” said Dr. Alexander Nürnberg.