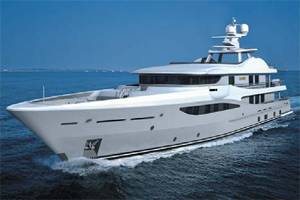 1) CMN, France
SpecTec has been contracted for the delivery of a comprehensive IDEA management software system to M/Y Slipstream and sister vessel M/Y Cloud Nine. Both vessels are currently under construction at CMN shipyard in Cherbourg, France and are due for delivery in February and June 2009 respectively.

2) AMELS, The Netherlands
SpecTec has been contracted for the delivery of a comprehensive IDEA management and documentation system to the next two vessels of AMELS’ 171 semi-custom mega yacht series. Both vessels are currently under construction at the yard’s Vlissingen facility and will be delivered mid 2009.


3) Abeking & Rasmussen, Germany
SpecTec has been contracted for the delivery of IDEA management software packages for Abeking & Rasmussen’s next yacht new builds 6481 and 6491 against strong competition from the shipyards in-house software department with their “Virtual Ship Explorer” (VSE).

4) Perini Navi, Italy
SpecTec has been contracted to install IDEA software packages on Perini Navi S/Y Selene (in picture) and the next new built of the yard 56m S/Y Riela.

5) Trinity Yachts, USA
SpecTec is currently installing IDEA software packages on Trinity new build M/Y Unbridled and has also been contracted to refit the system on M/Y Pangaea (left), which was delivered by the yard in 1999 and M/Y Katharine (right) on which IDEA is replacing the TECHMAN system currently in place.

6) Vosper Thornycroft, UK
SpecTec is currently installing an IDEA management software package on S/Y Mirabella, which is a very prestigious client as Mirabella is by far the biggest sloop in the world. She is more than 75m long and her mast measures nearly 90m! Also on this yacht the IDEA software is replacing and existing TECHMAN software system.

7) San Lorenzo Shipyard, Italy
SpecTec has received the order from San Lorenzo shipyard in Viareggio, Italy, to deliver IDEA software and documentation packages for the next two hulls of its successful 40m semi-custom yacht series. The vessels will be delivered in Summer and autumn of 2009 respectively.