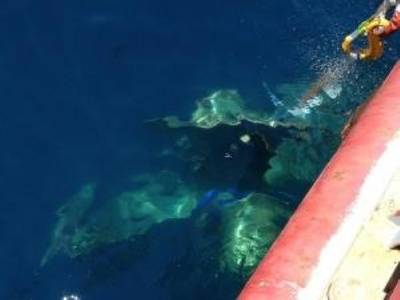 KiwiRail confirms that salvors Seaworks have successfully recovered the ferry Aratere’s propeller, which was lost from the ship when the shaft fractured on November 5, 2013 outside the Tory Channel.

“The propeller was retrieved from a depth of around 120 meters and approximately two nautical miles from Tory Channel using strops that were fitted around the blades of the propeller and part of the shaft via a remote controlled underwater vehicle. The propeller was then secured to the stern of the salvage vessel Brandywine and taken to Picton before being loaded onto the deck of the vessel by a crane,” said ferry operator, Interislander, General Manager Thomas Davis.

“The propeller will be brought back to Wellington by Seaworks where it will undergo a comprehensive examination by both TAIC and Interislander,” he added.

Seaworks used multibeam echosounder sonar equipment and a remote controlled underwater vehicle with cameras to locate the propeller, which weighs around 6 tonnes and would cost around $200,000 to replace.