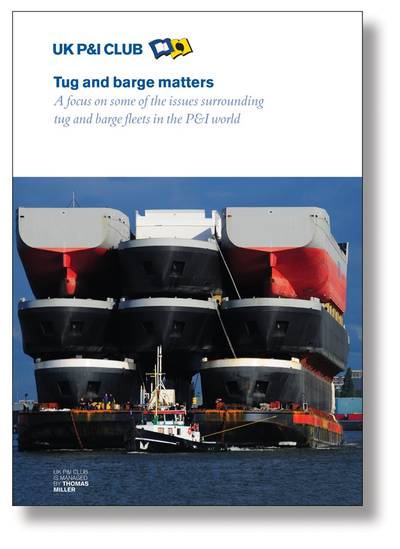 The UK Club's Loss Prevention team takes a close look at tug and barge operations worldwide from the P&I perspective.

The latest Loss Prevention publication from the UK P&I Club is entitled 'Tug and Barge Matters', running to 18 pages and heavily illustrated, it compares examples of bad and good practice.

As in many other shipping sectors, following good practice is usually very inexpensive and can be achieved for example by better signage and marking of danger areas such as on the mooring decks. Crews have a major role to play by noting hazards as they move around the vessel. Frayed wires, ropes and straps left where they could cause a trip should be attended to; likewise oil leaks and drips, no matter how minor.

Replacing damaged or worn-out equipment may come at a greater cost but there is no excuse for using such things. Replacing a fender, for example, is cheaper than the cost of meeting claims when an incident occurs.

Tugs and barges are often dangerous work environments especially in choppy seas. Crew and visitors transferring between tugs or between tugs and barges can easily slip and find themselves in the water or crushed between the two vessels.  Care needs to be taken at all times and ladders and rails need to be in first-class condition. Obvious, yes but in practice all is often not well.

The UK Club provides cover for several large tug operators who are now served by a dedicated Loss Prevention publication that complements other relevant publications such as its Risk Focus: Slips, trips and falls, published in April 2012.

'Tug and Barge Matters' can be downloaded here.