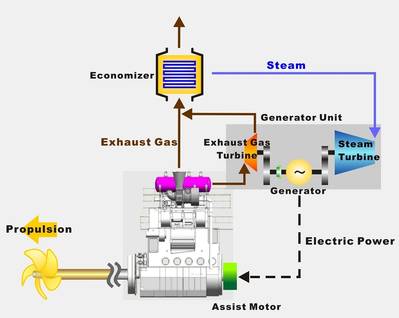 Mitsui OSK Lines, Ltd. today announced receipt of the 2014 Japan Society of Naval Architects and Ocean Engineers (JASNAOE) Award for development of a waste heat energy recovery system for marine diesel engine used to generate electric power and assist ship propulsion. The system was installed on a MOL-operated large-scale iron ore carrier. The award was made in ceremonies held in Sendai International Center, Sendai City, Miyagi Prefecture, Japan, on May 26, 2014.

The awards are given for excellent papers and research on shipbuilding, marine engineering, and other general maritime affairs, and for officially announced developments, inventions, and ideas for new technologies of practical value.

The system received the award recoveries weste heat energy in the exhaust of the main engine and generates electricity with high-efficiency integrated electric power generator - a combination exhaust gas turbine and steam turbine. The generated electricity is consumed not only to meet ship power demand but also to assist its propulsion by the shaft motor fitted to the crank shaft of main engine. By reducing the amount of fuel used by the main engine and power generators, the system also reduces CO2 emissions.

The system is one of the steps taken toward future marine engines in the ISHIN-III next-generation series of vessels that MOL announced in April 2010. MOL said it will continue with aggressive approaches aimed at developing technology to reduce oceangoing vessels’ impact on the environment.