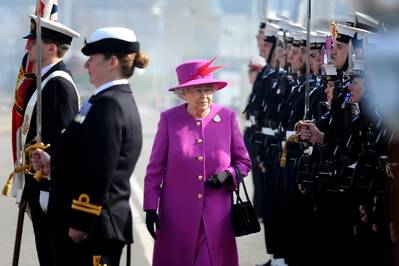 The Queen, who is the sponsor of HMS Ocean, attended the celebration of rededication of the ship following a £65 million refit at Devonport dockyard in Plymouth.

HMS Ocean, Britain’s largest warship and helicopter carrier was granted Freedom of the City in 2004. She has recently completed a fifteen-month refit.
On arrival the Queen, 88, was welcomed by Plymouth's civic dignitaries at the city's railway station before she travelled to the naval base. Her arrival was marked by a 21-gun salute.
Mayor Coun Stuart Porthouse travelled to Devonport in Plymouth today to represent the people of Sunderland at a ceremony performed by the Queen.
The fleet commander, Vice Admiral Philip Jones, presented Devonport's commander Captain Ian Shipperley, fleet chaplain Ian Wheatley and HMS Ocean's commander Captain Timothy Henry.
After moving to the dais, there was a royal salute and the national anthem was played by the Band of Her Majesty's Royal Marines Plymouth.
Capt Henry read the re-dedication order – which marks the ship's return to operational service – and the Queen inspected the front rank of the guard of honour.
The Queen then boarded HMS Ocean and viewed several demonstrations of the ship's capabilities, including meeting Lance Corporal Chris Scholes, of the Royal Marines, who was wearing camouflaged amphibious kit.