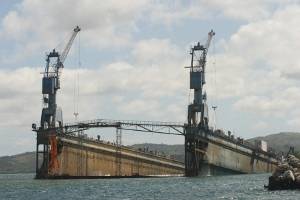 Resolve’s Salvage Master, Salvage Engineer, and salvage divers first conducted a comprehensive casualty assessment to determine the structural and watertight conditions of the drydock and to ascertain the status of drydock systems.  A detailed engineering analysis was undertaken and a Salvage Plan was developed and implemented, involving extensive preparatory work both topside and underwater. Given the deep submergence of the drydock well beyond normal operating limits, great care was taken to minimize hydrostatic pressures on tank boundaries during the refloating, and to keep global hull stresses and stability within allowable limits.  The U.S. Coast Guard and U.S. Navy reviewed and approved the complex salvage plan.
Due to the extensive maintenance being performed on the drydock prior to sinking, a large portion of its pumping system was inoperable. To overcome this challenge, Resolve mobilized 12 high-capacity electric salvage pumps.  Additionally, numerous gauging systems were established to monitor tank pressures and condition throughout the refloat operation.  “Large sunken drydocks are notorious for testing your skill and tenacity, and this was no exception,” said Resolve Salvage Master Todd Schauer.  “We were fortunate to have the support of an outstanding team including our client Guam Shipyard, as well as Heger Drydock and Mako Diving.”