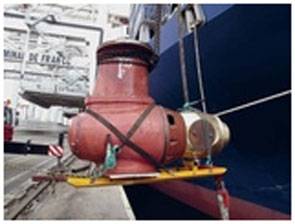 Due to a malfunctioning bow thruster, a 334 metre container vessel had to use the services of a tug boat for port maneuvering, so its owners requested Hydrex to take care of the removal, transportation and reinstallation of the unit. The operation was performed in stages in several locations to allow the vessel to keep to its sailing schedule.

Together with all the necessary equipment, the team travelled to Rotterdam where the operation started with a thorough inspection of the bow thruster unit. One by one the blades were then detached and replaced by blind flanges to prevent oil from leaking from the thruster.  Then the lifting and hoisting equipment that would be used to secure the unit during the second stage of the operation was installed. In the meantime, initial preparations were made in the bow thruster engine room for the removal of the unit, so that there would be no ingress of water once the unit had been taken out.

The vessel then left for Southampton where it met up again with the team which immediately continued getting the engine room ready. Next the support brackets connecting the gearbox to the thruster tunnel were cut and the unit was secured with chains. It could then be fully disconnected from the thruster room and was carefully lowered, extracted from the tunnel and brought to the surface. The second part of the operation ended with the installation of a blind flange to seal off the thruster tunnel from the engine room. The bow thruster unit was then transported to the Hydrex Fast Response Centre by the team and sent on to Norway for repairs.

As soon as the overhauled bow thruster gearbox was delivered to the Hydrex headquarters, the diver-technician team and the unit were mobilized to the container vessel’s next port of call: Le Havre. After a monitoring station had been set up next to the ship the team removed the blind flange inside the thruster tunnel. The unit was then put on a cradle that was designed especially for bow thruster operations and prevents the unit from tipping. As it can be adjusted to the size of the thruster, it allowed the Hydrex divers to bring the unit back into the thruster tunnel in one take.

Due to the size and weight of the bow thruster unit, special measures were taken to lower the thruster unit and bring it inside the tunnel where it was repositioned by using chain blocks. Despite the extra difficulty this entailed, the team was able to reposition the gearbox with only a minimum of delay. The unit was then secured with bolts, but the chains were kept in place because there was no time left to reinstall the brackets before the vessel had to leave for the next port on its schedule.

After stops in Dunkirk and Hamburg the team met up with the vessel in Rotterdam where the chain blocks were removed, following which the propeller blades were reinstalled one by one. To prevent water from ingressing and oil leaking, the blades were positioned at a 6 o’clock position instead of the more common and easier 12 o’clock position. Subsequently, the support brackets that connected the bow thruster unit to the thruster tunnel wall were reinstalled.

The ship then sailed to Southampton. At this location the brackets were secured, the pad eyes removed and the propeller blade bolts secured with wire. This concluded the repair.

The vessel can now maneuver inside ports again without the need of a tugboat. Hydrex’s flexibility allowed the company’s technical department to adapt the different parts of the repair to the sailing schedule. The delay for the customer was reduced to the strictest minimum and by performing both the removal and reinstallation of the bow thruster unit underwater the vessel did not have to go into drydock.