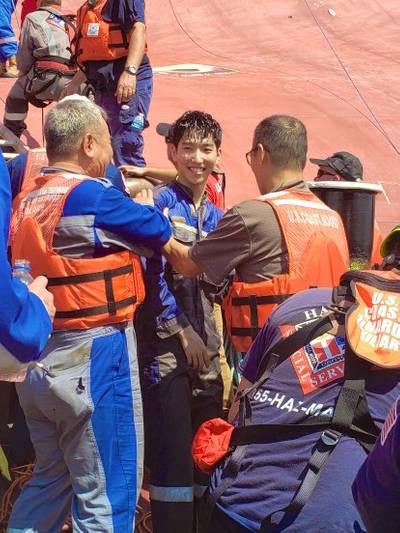 Rescue workers on Monday freed the final crew member trapped inside a South Korean cargo vessel that flipped on its side off the coast of Georgia, the U.S. Coast Guard said.

Salvage crews gradually drilled an opening in the ship's massive hull on Monday, first to deliver food and water to the survivors, then to extract them, the U.S. Coast Guard said.

The last missing crew member emerged from the hole at around 6 p.m. ET (2200 GMT) and was able to stand on the hull of the ship as rescue workers helped him, a USCG Twitter video showed.

The final crew member had been trapped behind a glass panel in the ship's engineering control room and was the only one of the four who did not get any food and water when rescuers broke through the hull around 35 hours into their ordeal.

Temperatures for rescue workers on the outside of the ship rose to 120 fahrenheit (49 Celsius) and USCG Captain John Reed told reporters he believed it was even hotter inside the vessel.

Asked about the condition of the three crew members rescued earlier, Reed said two of them had been able to walk off the hull of the ship and get on a tugboat. All three were taken to hospital. He declined to comment on what might have caused the vessel to tip over as it transported cars.

Helicopters rescued 20 crew members from the 656-foot (200-meter) Golden Ray on Sunday after it became disabled, began listing and eventually fell helplessly on its side in St. Simons Sound, near Brunswick, Georgia, the Coast Guard said in a statement.

The ship had previously called at the Port of Brunswick and was headed to Baltimore, according to the Vessel Finder website. The carrier was built in 2017 and was sailing under the flag of the Marshall Islands, it said.

(Reporting by Peter Szekely in New York and Andrew Hay in New Mexico; editing by Jonathan Oatis and Sandra Maler)