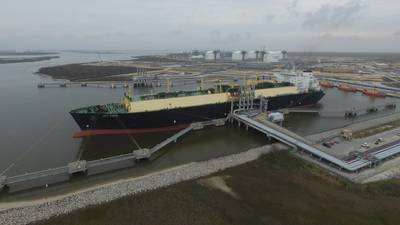 Dominion Energy Inc said on Tuesday it had no plans to renegotiate any of its liquefied natural gas sales contracts, a day after India's oil minister said state-owned gas processor GAIL (India) Ltd was renegotiating deals with Dominion and another U.S. producer.

"The characterization of contract renegotiations is false ... and Dominion Energy does not intend to renegotiate contract terms in the future," the company said in a statement.
India's oil minister Dharmendra Pradhan told lawmakers on Monday that GAIL was renegotiating purchase contracts with Dominion Energy and Cheniere Energy Inc, which owns the Sabine Pass export terminal in Louisiana.
The Indian company has contracts to buy up to 5.8 million tonnes per annum (Mtpa) of LNG from the United States.
LNG spot prices have plunged in recent years due to a glut of supply, and Indian companies have had some success renegotiating long-term purchase contracts.
Dominion Energy said while it had no plans to renegotiate contracts, it continued to talk with customers ahead of the launch of commercial operations at its $4 billion Cove Point LNG export terminal in Maryland.
The company nudged back the expected start of commercial operations at the 5.25 Mtpa plant to early next year from year-end 2017.
Once it enters service, Cove Point will be the second LNG export terminal in the lower 48 U.S. states, after Cheniere's Sabine Pass, which exported its first cargo in February 2016.
With Sabine Pass, Cove Point and a few other export terminals under construction, the United States is expected to have the third-biggest LNG export capacity in the world by the end of 2018.
(Reporting by Julie Gordon in Vancouver; Editing by Bill Trott and Richard Chang)