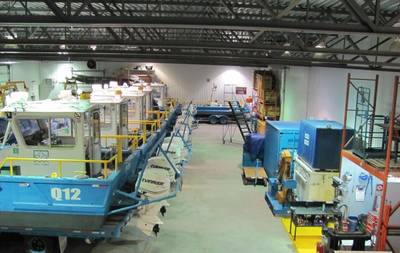 ECRC operates six centres in eastern Canada and provides marine oil spill response services in all navigable waters east of the Rocky Mountains. Boats powered by the 30 hp to 225 hp Evinrude E-TEC engines will be at the forefront of chemical and oil spill cleanup throughout Canada and the United States. The company, a member of the Global Response Network that supports worldwide oil spill response, maintains approximately $40 million in equipment inventory and 34 full-time employees to sustain a constant state of readiness.

“In choosing Evinrude outboard engines, our organization examined the projected low cost of ownership, the low environmental impact and the easy storage of Evinrude E-TEC engines as these were important factors in our decision,” said James Carson, president and general manager of ECRC. “BRP’s commitment to this project was clear from the start, and the engine replacements were completed on time without compromising ECRC’s capability.”

BRP's Evinrude E-TEC engines are engineered for easy upkeep and require no dealer-scheduled maintenance for 3 years or 300 hours. When combined with superior fuel economy, the Evinrude E-TEC outboard is a reliable engine platform with a much lower total ownership cost than others on the market.

“Evinrude E-TEC engines are relied upon for many uses, but maybe none more important than protecting people and our environment.” said Yves Leduc, vice-president and general manager for BRP’s North America division. “BRP supports ECRC's critical mission to safeguard our waterways.” An Evinrude E-TEC engine has the lowest reportable emissions of any outboard brand. The Environmental Protection Agency (EPA) granted BRP a “Clean Air Technology Excellence Award’’ in 2005 for Evinrude E-TEC technology.