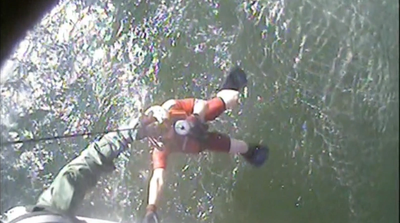 Two fishermen were rescued from their sinking shrimp boat by a U.S. Coast Guard aircrew Friday off the coast of Saint Simons Island near Brunswic, Georgia.

Watchstanders at Coast Guard Sector Charleston received the initial report at approximately 9:30 a.m., on VHF channel 16 from one of the distressed fishermen, stating that their 55-foot shrimp boat was taking on water and was in danger of sinking. While the watchstanders made arrangements to launch a rescue crew from Coast Guard Air Station Savannah, they maintained constant radio contact with the fishermen until they boarded the ship's life raft.
The responding aircrew arrived on scene and hoisted the two men aboard and transported them to Coast Guard Station Brunswick where local a EMS crew was standing by.
Salvage of the shrimp will be coordinated by the owner.