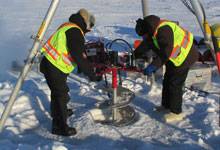 As sea ice continues to recede at a record pace in the Arctic, officials at the Office of Naval Research (ONR) on April 14 announced new efforts to determine the pace of change in what some are calling Earth's final frontier.

Scientists sponsored by ONR have traveled to the Beaufort Sea in the Arctic Ocean, placing new sensors in the ice and in the frigid waters below, to better understand the processes contributing to a dramatic decline in sea ice thickness and extent-and provide new tools to help the U.S. Navy predict conditions and operate in once-inaccessible waters.

"A changing Arctic means significant new responsibilities and opportunities for the scientific and research communities, the nation and our allies," said Rear Adm. Matthew Klunder, the chief of naval research. "ONR researchers, working in one of the world's most challenging environments, will give U.S. naval planners the essential data we need."

The effort, which includes partnership with the government of South Korea, involves aircraft and icebreakers to deploy sensors to compile and coordinate new data on rapidly changing conditions, particularly as it applies to the Marginal Ice Zone (MIZ), where ice and open ocean meet.

ONR scientists aim to assist Navy planners not only in short-range (zero-five days) but long-range (six or more months) timeframe predictions in these areas where the ice is located between solid pack ice and the sea.

"Where we have had ocean models and weather models, we clearly need new ice models as well," said Scott Harper, MIZ project manager for ONR. "We need better operational predictions-Sailors and ships are at risk without higher resolutions and shorter forecasts."

The effort to gain knowledge about new waterways in once-inaccessible regions supports a directive from Chief of Naval Operations Adm. Jonathan Greenert, who has made understanding changes in the Arctic a priority.

"The U.S. Navy recognizes that the opening of the Arctic Ocean has important national security implications as well as significant impacts on the U.S. Navy's required future capabilities," he noted in the U.S. Navy Arctic Roadmap 2014-2030. "Today, the observed changes in the Arctic Region climate and the reduced extent of summer sea ice reveal the potential for the Arctic Ocean to become a more viable route for international shipping over the coming decades."

The director of the Task Force Climate Change and Oceanographer of the Navy, Rear Adm. Jon White, emphasized the importance of the research.

"ONR's research focus is aligned with the Navy's Arctic Roadmap Implementation Plan, and will help us better understand and predict an environment that will still continue to present significant challenges for surface and air operations," said White. "While there is much preparation the Navy needs to do before it starts conducting routine operations in the Arctic, understanding the dynamic environment and the rate of change is a critical foundation for these future operations."

The five-year analysis of the MIZ will utilize a combination of some of the most advanced technologies, including ice mass balance buoys, wave buoys, ice-tethered profilers, autonomous gliders, ocean flux buoys, remote sensing and more.

"There's a lot more open water in the Arctic Ocean today, so there are significantly greater waves and swell," said Harper. "That didn't happen before, and we need to give Sailors every possible tool to operate safely in new environmental conditions."

David Smalley is a contractor for ONR Corporate Strategic Communications.