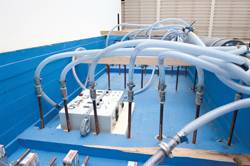 The air supply system of the air cavity ship was reproduced faithfully on model scale.

Although it is possible to optimise the wave pattern and the hull, skin friction is almost a constant. Reducing friction by injecting air has been tried before but actually accomplishing a power reduction has proven more difficult. The beneficial effect of air bubbles on the drag for boundary layers is well known but two important effects block its application for displacement ships. Small microbubbles  are effective at reducing drag but are challenging to produce in a laboratory, let alone aboard a ship. Large bubbles that can be produced easily only remain in the boundary layer briefly and their beneficial effect dissipates quickly. This is difficult to verify at model scale when air bubbles do not have sufficient time to escape the boundary layer. Trials with a ship fitted with blowers supplying air through porous plates in the side and bottom plating showed a resistance reduction of only 1% to 2%.
A series of cavities in the hull filled with air, whereby the boundary layer is removed altogether, proved to be far more effective. However, a poorly designed cavity can increase resistance and some hull forms are not suited. Together with DST and DAMEN Shipyards Group, a series of model tests and trials with the modified inland ship Kraichgau were performed and results showed net power savings as high as 15%. The ship performed equally well in both deep and shallow water. Tests where Kraichgau sailed unnervingly close to passing ships, bridge pylons and riverbanks confirmed that the cavities remained filled with air and continued to operate as intended. Addressing questions such as how we can get bubbles to work and how much we really gain from air cavities, MARIN will continue its research on air lubrication.
About the Author
Evert-Jan Foeth is project manager Ships at MARIN, the Maritime Research Institute Netherlands. MARIN offers simulation, model testing, full-scale measurements and training programs, to the shipbuilding and offshore industry and governments.  For more information:e.j.foeth@marin.nl.
(As published in the December 2011 edition of Maritime Reporter & Engineering News - www.marinelink.com)