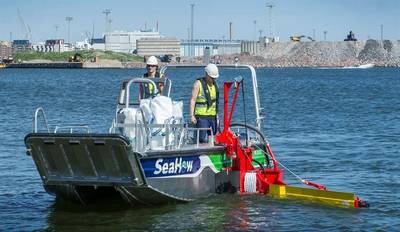 SeaHow said its new skimmer systems can be implemented to almost any workboat over six meters in length. Skimmers are designed to collect both light and heavy oils efficiently. These features provide new operational efficiencies especially for near shore and coastal oil spill response. (Photo: SeaHow)

SeaHow has launched a new product line of skimmers aiming to address the challenges encountered by the oil spill response (OSR) organizations.
SeaHow, operator one of northern Europe’s largest fleets of OSR vessels, said that over the 30 years that it has carried out OSR work, it has found several challenges with the existing equipment, leading the company to launch its own skimmer system product line.
Launched after three years of product development, SeaHow skimmer product line consists of different sizes of skimmers suitable to vessels from six meters long to the largest vessels used in off-shore OSR. Skimmers are easy to deploy and operate, making it possible to turn virtually any work boat or larger vessel into an OSR vessel in case of an accident.
“Most of the funds available for OSR equipment acquisition is today used for purchasing vessels, leaving little money for the OSR equipment itself,” said Jari Partanen, CEO of SeaHow. “By using SeaHow skimmers you can utilize your existing vessel fleet and direct the investment funding to the OSR equipment itself.”
According to SeaHow, most of the OSR equipment currently operated by OSR preparedness organizations only can collect heavy oil qualities. The EU Sulfur Directive, implemented from January 1, 2015 increases the use of light oils as vessel fuel in Northern Europe significantly, pressuring organizations to update their OSR equipment.
SeaHow said its new products are among the first skimmer products that can truly collect both light and heavy oils efficiently. “The capacity tests carried out by Lloyd’s Register not only show that the light oil collection capacity of the skimmers is excellent,” said Hannu Hoviniemi, Director of SeaHow Business Development, “but also shows an incredibly high efficiency. When collecting light oil from water surface, over 90% of the collected liquid is oil.”