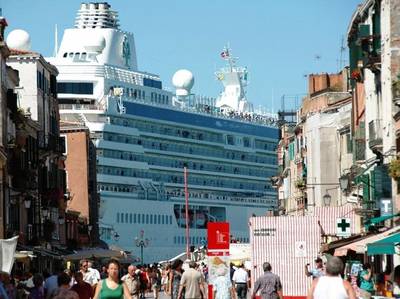 The Italian government has announced it will begin to limit the number of large cruise ships that pass through Venice. Environmentalists have protested against the ships in recent years, saying they damage the city's fragile lagoon, reports BBC News.

From January 2014, the number of cruise ships allowed through Venice will be cut by 20%. Ships of more than 96,000 tonnes will be banned from the centre of the city from November next year.

Concerns over big ships sailing too close to shorelines have increased since the Costa Concordia cruise liner ran aground off a Tuscan island in January 2012 and environmentalists also feel that the ships are grotesquely out of keeping with the beautiful old city.