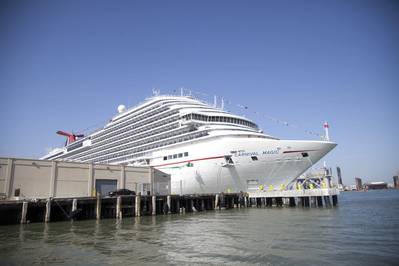 The Carnival Magic cruise ship was en route back to the United States on Saturday with a passenger from Texas who might have handled specimens of the first Ebola patient diagnosed in the United States but is considered at low risk, a company spokeswoman said.

The Dallas health care worker, who is said to have no symptoms and according to standards from the U.S. Centers for Disease Control and Prevention is at the end of the 21-day maximum incubation window for Ebola, had voluntarily gone into isolation along with a companion aboard the ship.

The Texas Health Presbyterian Hospital worker did not have direct contact with now deceased Liberian patient Thomas Eric Duncan at the Dallas hospital but could have processed his bodily fluids 21 days ago, U.S. officials said.

The patient boarded the ship in Galveston on Oct. 12 for a seven-night cruise.

The health care worker remained in self-quarantine and was not ill, Bello-Cabreriza said. "Regular debarkation will take place," she said. "The lab worker continues to show no symptoms."

The hospital worker left the country before being notified of the CDC's updated requirement for active monitoring, U.S. government officials said on Friday.

Concerns about Ebola in the United States have intensified after two nurses from the Dallas hospital who cared for Duncan contracted the virus, which has killed nearly 4,500 people, mostly in West Africa. The White House is facing sharp criticism from U.S. lawmakers over its efforts to contain the disease.

On Thursday, Frontier Airlines said six crew members were placed on paid leave for 21 days "out of an abundance of caution," after learning that a nurse who had treated Duncan in Dallas may have been symptomatic when she flew on the airline earlier this week.