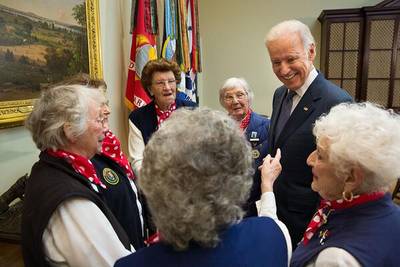 Six of the original "Rosie the Riveters" who worked in Kaiser Shipyard during World War II gained a little more recognition Monday after being welcomed to the White House by U.S. Vice President Joe Biden.

ABC reported that Phyllis Gould, one of the original riveters, wrote a letter to Vice President Biden stating her dream was to meet him and the President, prompting the meeting at White House.

The six women, who worked as welders, electricians and draftsman at the Richmond, Calif. shipyard while the men fought overseas, donned their signature red bandanas as they were met with hugs and kisses from Biden and a surprise visit from President Obama, according to ABC’s report.

By the end of World War II, more than 18 million American women went to work, many occupying “blue-collar” jobs traditionally performed by males, thus initiating change to long-established attitudes toward gender relations in the United States.

“This was the start of the first women's liberation movement," Biden told ABC. “You see these women working in a factory doing anything any man can do. It began to change everything.”