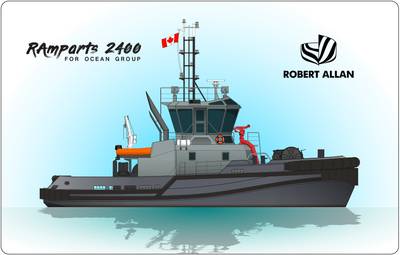 Robert Allan Ltd. announced that  they have been awarded the contract from Ocean Industries Inc., a related corporation of Ocean Group Inc., to design a new generation of Ship Handling tugs to be built at the Ocean Industries Inc. shipyard at L'Isle-aux-Coudres, Quebec for the Royal Canadian Navy.

Four tugs are to be built, with two delivered to each of Canada’s major naval bases, at Esquimalt, BC and Halifax, NS.

Known as the Naval Large Tug (NLT) project, the new IMO Tier III vessels are based on a proven Robert Allan Ltd. RAmparts 2400 design which has been built in large numbers by Sanmar Shipyards in Turkey as well as three additional international shipyards. Varying power levels of this design are available. Forty-eight tugs using this hull form have been delivered to date and design iterations continue to be built for worldwide use.
Robert Allan Ltd also recently completed the design of a second group of similar sized EPA Tier 4 compliant tugs for the US Navy which are now under construction at Dakota Creek Industries’ shipyard in Anacortes, Washington. When completed, these six vessels will join an earlier flight of six Robert Allan Ltd. tugs.

Details of the selected NLT design include: