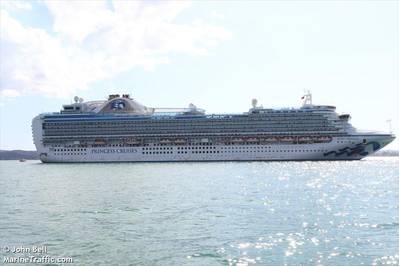 A cruise ship at the heart of Australia’s biggest coronavirus cluster arrived off the Philippines on Thursday to repatriate more than 200 crew, leaving behind weeks of outrage and acrimony over why symptomatic passengers were allowed to disembark.

Just under a quarter of Australia’s 97 coronavirus deaths can be traced back to Carnival Corp&rsquo;s Ruby Princess, which has been a flashpoint for anger in Australia and the focus of a criminal investigation after a spike in cases followed its March 19 arrival in Sydney.

The 114,000-tonne, 19-deck ship reached Manila Bay on Thursday, joining a cluster of about a dozen other cruise ships that will be subjected to on-board testing for COVID-19 before any Filipino crew members can disembark.

Reduced flights and travel bans due to the coronavirus, as well as outbreaks on several ships, have brought the cruise industry to a virtual standstill.

Princess Cruises said on Wednesday its voyages would remain suspended through to the end of summer.

According to the coastguard, there are 214 Filipinos aboard the Ruby Princess, one of at least three ships owned by Carnival’s cruise company that became hotbeds of coronavirus infections.

A special commission of inquiry in Australia has been hearing testimony this week about events leading up to the unloading of about 2,700 passengers without health checks.

Included at the hearing were details of medical logs a few days earlier that showed dozens of people aboard were showing acute respiratory symptoms, with numbers rising each day.

Nearly 700 guests who disembarked later tested positive for the coronavirus, some spreading it across Australia, including to far-flung places like Tasmania, where all but two of 12 deaths stem from the cruise ship.

Carnival has said it would cooperate with the investigation by the New South Wales state homicide squad.

At the weekend, Admiral Joey Garcia, commandant of the Philippine coastguard, said he hoped testing of the cruise ships in Manila Bay could be completed within a week and quarantine “graduates” could return home soon.

On Wednesday, 1,912 Filipino crew members aboard seven ships were visited by task force personnel carrying out the tests.

“The ship itself is the quarantine place for the seafarers,” Garcia said. “The quarantine rule is to have all of them tested before they disembark.”

More than 500 crew of 15 nationalities were repatriated from the Ruby Princess last month.