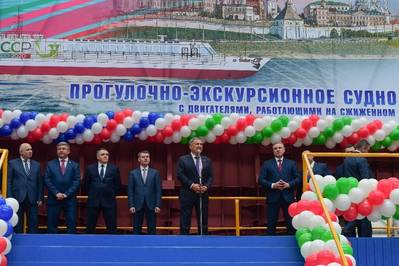 Russia's Gazprom announced the keel-laying for the country’s first passenger ship to be powered by liquefied natural gas (LNG) was held at the Zelenodolsk shipyard.

A Gazprom delegation headed by Vyacheslav Mikhalenko, Member of the Management Committee, Head of Department, took part in the keel-laying ceremony for Chaika LNG, the first passenger ship in Russia to be powered by LNG.

The Chaika LNG leisure and sightseeing boat (motor ship) is intended for passenger voyages, including via tourist routes. The vessel, which can accommodate at least 170 people, is expected to be launched as early as this year.

The Republic of Tatarstan is a unique location from a logistics standpoint, and it has robust transport potential in terms of cutting-edge industrial technologies. It is planned that the region will produce LNG-powered tourist ships and Gazprom will be responsible for refueling said ships.

Zelenodolsk Plant named after A.M. Gorky is one of Russia's largest shipbuilding companies. The Plant has produced more than 1,500 maritime and river vessels.