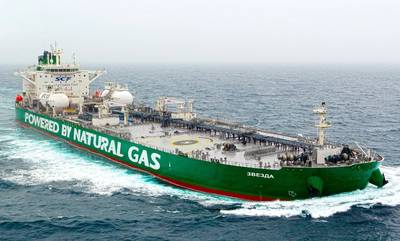 Russia's top shipping company Sovcomflot (SCF), already struggling to find berths to discharge cargoes, is facing fresh pressure after the UK on Thursday joined countries that have slapped sanctions on it, with implications for insurance and certification.

With a modern fleet of ships, state-run SCF is a key transporter of Russian oil and liquefied natural gas but also carried cargoes previously from other countries such as the United States.

Since Moscow's invasion of Ukraine on Feb. 24, shipping sources say SCF has faced growing challenges in concluding charters as ports, end purchasers, marine insurers and other freight companies pull back from Russian business.

Even before London imposed sanctions on the company on Thursday - along with more Russian banks, critical industries and a host of the country's elite - the SCF operated tanker NS Champion had been forced to change course away from Britain on Feb. 28 due to docking restrictions on Russian vessels.

Maria Angelicoussis, chief executive of the Angelicoussis Group, one of the world's leading shipping companies, told the FT Commodities Global Summit this week that Sovcomflot's fleet was "facing issues", while also pointing to the wider trend of "big hesitancy" among ship owners to carry Russian cargoes.

SCF did not immediately respond to a request for comment.

The NS Champion's subsequent voyage took it toward the coast of Denmark, but it has since changed course again for the Baltic Sea area, ship-tracking data shows.

The European Union last week listed SCF among Russian state-owned companies with which it was "prohibited to directly or indirectly engage in any transaction" after a wind down period ends on May 15, Canada added it to a list of designated entities in February while the United States has restricted it from raising capital in its financial markets.

"The approach of governments towards Sovcomflot has been somewhat confused and different between jurisdictions and has left people to trying to work out what they are doing," said an insurance industry source with knowledge of the situation.

"The (UK's) decision this morning to impose an asset freeze means it is going to be very difficult for UK based insurance companies or reinsurers. No contract can function on the basis of an asset freeze."

Russia's maritime sector is already grappling with the winding down of services including ship certification by leading foreign providers such as Britain's LR and Norway's DNV.

Classification societies provide services such as checking a ship's seaworthiness, with certification essential for securing insurance and entry into ports. It was unclear what would happen to SCF's fleet once cover is withdrawn.

A DNV spokesperson said on Thursday that it was "still in the process of winding down all business with Russian entities and that Sovcomflot is part of this process".

A spokesperson for LR said separately that it was "continuing to disengage from the provision of all services to Russian owned, controlled or managed assets or companies".

Stale Hansen, Skuld's president and CEO, said there were vessels with a "Russian nexus" in its portfolio, adding that it was monitoring all new sanctions and the consequences of them for Skuld’s membership cover.

Guangzhou Shipyard delivered a pair of innovative ships recently: the 274m, 157,300 dwt Greenway reported to be the world’s…