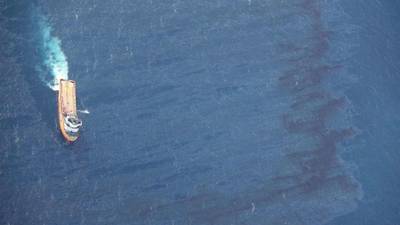 Chinese salvage crews are still trying to remove 1,900 tonnes of bunker fuel, the heavy oil used in ship engines, from a sunken Iranian oil tanker, the Ministry of Transport said on Thursday, almost a month after it collided with a freight ship.
If the fuel is not cleaned up, it could pollute the marine environment, the ministry warned in a release. Bunker fuel is noxious to marine organisms and difficult to remove from the ocean once spilled.
Five Chinese vessels, and one Japanese ship and one South Korean, are involved in the clean-up effort that spans almost 226 sq nautical miles, while an investigation into the cause and examination of the tanker's "black box" continues.
The oil tanker Sanchi and the freighter CF Crystal collided in the East China Sea on Jan. 6, resulting in the worst oil tanker spill in decades.
Three bodies from the Sanchi's crew of 30 Iranians and two Bangladeshis were recovered before it sank in mid-January. Salvage crews have not found any other bodies on the surface of the sea, the government said on Thursday.