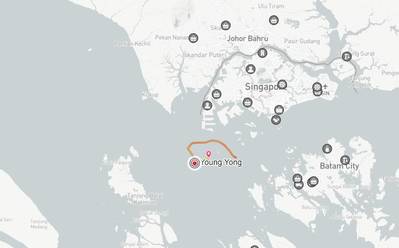 U.S.-sanctioned oil supertanker Young Yong is being towed to an anchorage area in Nipah, Indonesia, after the stranded tanker was successfully refloated, Commander of Indonesia's First Fleet Arsyad Abdullah said on Thursday.

The tugboats that had surrounded the ship were also dispersing, data on Refinitiv Eikon and MarineTraffic website showed.

On Refinitiv Eikon, Young Yong's status has been changed to "restricted manoeuvrability" from "aground", which would indicate the vessel is floating but that the crew does not have full control of the vessel.

The United States allowed some transactions necessary to dock and anchor the Young Yong safely and make repairs as part of the efforts to free the vessel. The supertanker ran aground off Indonesia's Riau Islands on Oct. 26 near a gas pipeline.

It had been heading to Nipah, a ship-to-ship transfer hub.

The Young Yong was among the vessels sanctioned through its ownership.

The supertanker is filled with about 2 million barrels of Venezuelan fuel oil after receiving the cargo through ship-to-ship operations last month, according to vessel monitoring services.

(Reporting by Ananda Teresia in Jakarta and Isabel Kua in Singapore; Writing by Florence Tan; Editing by Tom Hogue)