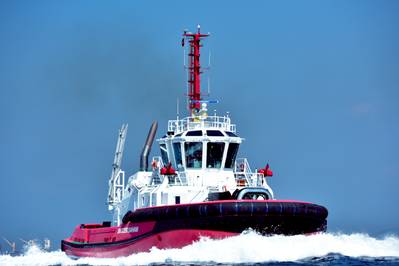 Svitzer Saham is the final vessel in a series of new tugs for Svitzer in the Port of Sohar. (Photo: Sanmar)

Turkish shipbuilder Sanmar Shipyards said it will soon deliver the fifth and final vessel in a series of new tug builds for operator Svitzer at Oman's Port of Sohar.

Svitzer Saham's arrival to the Port of Sohar will conclude the current fleet development aims of the operator, Svitzer and Port of Sohar; agreed as part of the 15 year renewal of the former's marine services contract, awarded in early 2019. These five tugs will together deliver a combined 340 tonnes of total bollard pull across the new fleet. Mobilization to the Port of Sohar from Turkey will commence imminently under the direction of a Sanmar delivery crew.

The design has a sponsoned hull form to enhance escort towing and seakeeping performance.

Jacob Bac, Deputy Harbour Master at the Port of Sohar, said, “The Svitzer Liwa and Svitzer Barka bring a whole new level of towage to Sohar Port. With their sharp handling and maneuverability along with their instant power and good looks, they certainly are a force to be reckoned with.”

Svitzer has previously placed orders with Sanmar Shipyards in recent years for 25 tugs in total, 23 ASDs and two ATDs, employed in the fulfillment of various towage contracts.