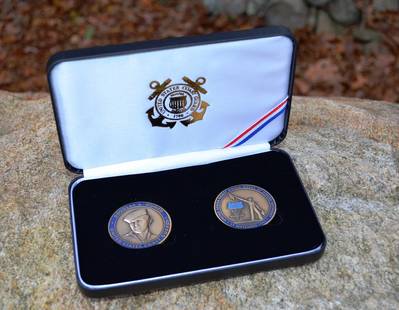 To establish the fund, the Coast Guard Foundation is offering a limited-edition challenge coin set that honors Munro and his service in the Coast Guard. The coin set will be offered to individuals who donate $100 or more to the scholarship fund. The American-made collectable coins are numbered and bear Munro’s likeness on the front, and an image of a statue erected in his honor and his Medal of Honor on the back. They are presented in a custom-made display case.

“The name Douglas Munro reverberates throughout the Coast Guard world and we are honored to have his name on our newly established scholarship fund,” said Anne Brengle, president, Coast Guard Foundation. “We have helped hundreds of Coast Guard children complete their college education, and we look forward to helping even more in the name of this brave and heroic individual.”

About Douglas Munro: Signalman First Class Douglas Albert Munro’s name graces the U.S. Coast Guard's headquarters in Washington, D.C., as well as the Coast Guard Foundation's planned giving society. He was killed in action on Guadalcanal on September 27, 1942 after helping a detachment of Marines escape from a point where enemy opposition was far worse than anticipated. Munro was in charge of a fleet of 10 boats that successfully landed the Marines. He got them ashore and headed back to his assigned position, but immediately learned that the conditions on the island were much more dangerous than expected. Munro led the evacuation of Guadalcanal, bringing the boats under heavy enemy fire to rescue the Marines. In order to save the last men leaving, he moved the boat he was on to serve as cover. He was fatally wounded protecting the Marines fleeing enemy fire. Visit douglasmunro.com for more information.

For over 40 years, the Coast Guard Foundation has been committed to inspiring leadership, learning and a proud legacy of service to our nation by supporting the men of women of the United States Coast Guard. The Foundation provides higher education grants to enlisted members, reservists and their children, higher education financial support for families of Coast Guard members lost in the line of duty, and support for morale programs, including funding recreation, exercise and family-oriented facilities.