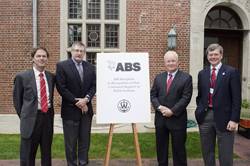 Webb Institute, a four-year college specializing in Naval Architecture and Marine Engineering, announced the receipt of $100,000 in annual scholarships from the American Bureau of Shipping (ABS). The ABS Scholarship Program provides financial support to deserving engineering and naval architecture students based on GPA, class rank, leadership ability and recommendations. “Webb Institute is honored to receive ABS’ continued support of our students as they pursue their educational aspirations,” saidthe President of Webb Institute, RADM Robert C. Olsen, Jr USCG (Ret.) “Through this scholarship program and the support of the ABS Chair of Naval Architecture and Marine Engineering ABS will continue to serve as a catalyst for advancing educational programs in the maritime industry.”
“ABS is proud of its partnership with Webb Institute and we fully believe in its mission of preparing graduates for maritime careers”, stated ABS President and CEO Christopher J. Wiernicki, a member of Webb Institute’s Board of Trustees. “We believe supporting the next generation of maritime professionals is an important element of ABS’s mission to protect the safety of life, property and the natural environment.  We are pleased to be able to continue our support of Webb Institute and wish the scholarship winners continued success in all their future endeavors.”
Webb presented the first $50,000 scholarship on May 10, 2012. The presentation of this scholarship preceded a special lecture entitled “Titanic Revisited, 1912-2012,”given by Dr. Stephen M. Payne. The second scholarship will be awarded in the fall of 2012 for the 2012-13 academic year.
The scholarship award is based on academic performance, work term performance and service to Webb Institute. The first ABS scholar, Jonathan Soja ’13, was announced by Christopher J. Wiernicki at a reception hosted on the campus of Webb Institute in Glen Cove, NY. In addition to his outstanding academic standing, Jonathan, a rising senior, is the Honor Council Chairman elect and has participated on Webb’s tennis team for the past three seasons.
“Webb Institute is very grateful for these very generous scholarship awards and hopes to continue the exceptional longstanding relationship with ABS, helping to prepare new generations of graduates entering into the marine and offshore industries,” said Olsen.