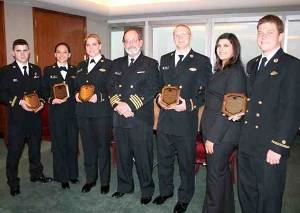 Buehler, a marine engineering systems design major and electrical engineering minor, has a GPA of 3.6, plays rugby and serves the first company as an honor board chairman and training officer. During his sea year, he sailed on various ships traveling to Europe, South America, Hawaii and Puerto Rico. After graduation, the Orange, Calif. native, hopes to serve in the Naval Reserve as he works as a third engineer on a tugboat or on a Military Sealift Command Naval supply ship.

Delargy, a logistics senior, is a member of the O'Gara Academic Honor Society and maintains a GPA of 3.75, achieving a 4.0 twice so far, with 6 Gold Stars and 1 Silver, and has led his Computer Aided Operations Research Facility (CAORF) team to the rank of top watch of 2010. Delargy is also the Regimental Master of the Training Vessel Kings Pointer. The Lynbrook, N.Y. native is interested in a career with the towing sector and ultimately the Sandy Hook Harbor Pilots.

Since attending USMMA, Morrison has broken the School Record in discus while winning the first individual title in the Landmark Conference and is the Second Rotation Regimental Color Guard Commander. The Southern California native, who has interned with Crowley, will have an Unlimited Third Mates License and Qualified Member of the Engine Department (QMED) Certification when she graduates in June. During her sea year, Morrison sailed on the ATC tanker Alaskan Frontier, Crowley-operated Hapaq-Lloyd's Philadelphia Express and interned twice with Crowley. She has also had internships on Crowley's Tug Nanuq in Valdez, Alaska and at petroleum transportation operation in Long Beach, Calif., learning the chartering system and about the newest Articulated Tug Barges used on the West Coast.

O'Connor has spent the last three years at USMMA making lifelong friends, becoming captain of the men's varsity crew team and focusing on his studies in order to attain his Coast Guard license. A native of Wilmington, N.C. and longtime Jacksonville resident, he looks forward to graduating and beginning his career in the maritime field.

The scholarship program began informally at first, but over the years has grown as Crowley Chairman, President and CEO, Tom Crowley Jr., has directed the company to present scholarship dollars to deserving students in the name of his father Thomas B. Crowley Sr., who guided the company to extraordinary heights before passing away in 1994. The company has also donated more than $2m over the years to support other educational programs.

The CII's scholarship was renamed the Richard A. Simpson scholarship in 2008 following his passing. A longtime Crowley executive and a member of the CII board, he served as either chairman or president for over 20 years. Simpson founded the CII scholarship program in 1992.