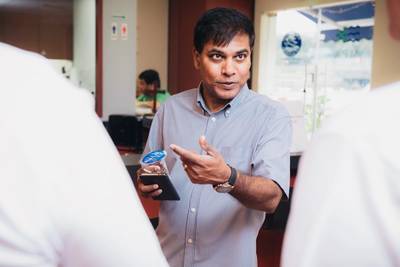 Photo: The Mission to Seafarers

Global maritime welfare charity The Mission to Seafarers outlines emergency support work with surviving crew members of the Thorco Cloud – a general cargo vessel which sank in the Singapore Strait after a collision on December 16. The other vessel involved, chemical tanker Stolt Commitment, received only minor damage and is in a stable condition.

Cayman Islands-registered Stolt Commitment and freighter Thorco Cloud bearing the Antigua and Barbuda flag collided in the eastbound lane of the Traffic Separation Scheme (TSS) in the Singapore Strait. The incident occurred in Indonesian waters 11 kilometers northwest of Batam.

Search and rescue operations have been continuing to try and locate a further six missing seafarers but so far no-one else has been found.

The Revd Peter Manimathu, Port Chaplain for The Mission to Seafarers in Jurong Port, said, “Six Filipino crewmen of the Thorco Cloud were rescued last night by the coastguard and their families have been notified. Another six crew are still unaccounted for. The vessel sank upon impact when the tanker hit the cargo vessel. They were taken to Singapore General Hospital for treatment and observation. I met with the surviving crew and the Captain, who are all very distraught. They told me that they had survived by staying afloat with life jackets but they all thought that they were going to die. One crew mentioned that while in the water, he slipped on every attempt to get on to a floating metal cover as he was covered in bunker oil, it was very frightening for him. As they had lost all their personal belongings, I provided them with clothes, a phone so that they could call their anxious families and prayed with them. The Mission to Seafarers in Singapore will do everything in our capacity to support them and will continue to visit them and provide care over the coming weeks.”

The Revd Canon Stephen Miller, Regional Director for East Asia, The Mission to Seafarers, said: “This is a terrible tragedy for those crew and families involved in the collision in [the Singapore Strait]. Our welfare team in the port of Jurong are providing urgent support to those who have suffered. We are very aware that the families of the seafarers are facing an anxious few days and the surviving crew will need our help when they arrive back home. We have therefore alerted our seafarers’ families’ project team, led by Mrs. May Jose in Manila, who are in touch with the Filipino families that have been affected. The Mission team plan to start visiting tomorrow to offer further care and practical assistance. We have also been in touch with the respective embassies in Singapore on behalf of the crew members who are still missing.”

MPA has issued navigational broadcasts to vessels in the vicinity to keep clear of the area and to report any sightings of the missing crew members. There is no disruption to shipping traffic in the Singapore Strait.

Thorco Cloud was carrying 560 metric tons of bunker fuel when it sank. While there are currently no reports of any oil spill, MPA has also put on standby antipollution craft.

[Editor’s note: This story has been updated to include addition detail and clarify that the incident occurred in Indonesian waters]