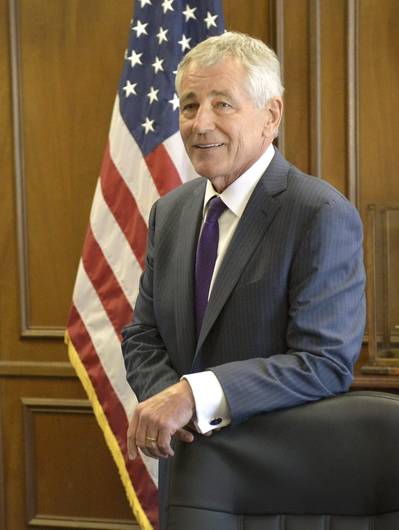 Obama announced the resignation at a White House event with Hagel at his side. Hagel will remain in the job until a successor is in place.
Hagel was appointed less than two years ago as Obama pushed his signature program of winding up wars in Afghanistan and Iraq, a process that is being upended this year with U.S. re-engagement in Iraq and greater military cooperation with Kabul.
The former Republican senator, who had struggled to improve his ties with Congress after a contentious 2013 confirmation hearing, submitted his resignation letter after lengthy discussions with Obama that began in October, officials said.
"A successor will be named in short order, but Secretary Hagel will remain as Defense Secretary until his replacement is confirmed by the United States Senate," a senior Obama administration official said.
Obama said at the White House event that Hagel had always been candid with his advice and had "always given it to me straight."
Hagel raised questions about Obama's strategy toward Syria in a two-page internal policy memo that leaked this fall. In it, he warned that Obama's policy was in jeopardy due to its failure to clarify its intentions toward Syrian President Bashar al-Assad.
Obama has insisted that the United States can go after Islamic State militants without addressing Assad, who the United States would like to leave power.
Fresh Leadership Needed
Officials said Obama wanted fresh leadership during the final two years of his administration.
"What I can tell you is there are no policy differences in the background of this decision,” a senior U.S. defense official said. "The secretary is not resigning in protest and he’s not being ‘fired'," the official said.
Top potential candidates to replace Hagel include Michele Flournoy, a former under secretary of defense, and Ashton Carter, a former deputy secretary of defense, who were rumored to be contenders for Hagel's job before he was named.
Senator Jack Reed, Democrat of Rhode Island, is another possible contender.
Hagel, who was the only enlisted combat veteran to serve as defense secretary, ran into a wave of opposition when Obama, a Democrat, nominated him.
Republicans objected because Hagel opposed the 2007 Iraq war 'surge' of troops, which eventually helped defeat al Qaeda and other militants and opened the way for a U.S. troop withdrawal.
Hagel, who became an outspoken critic of the administration of President George W. Bush, had also upset many in his party by endorsing Obama in his presidential race against Republican Senator John McCain in 2008.
Hagel was seen as poorly prepared and hesitant during his confirmation hearing, including refusing to answer 'yes' or 'no' when McCain demanded he judge whether he was wrong to oppose the surge strategy.
(Reporting by Phil Stewart and Steve Holland; Editing by Doina Chiacu, David Storey and James Dalgleish)