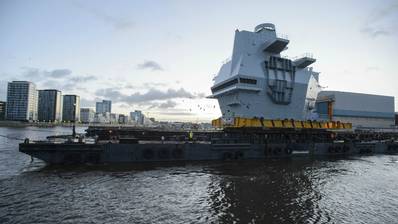 The final section of aircraft carrier HMS Prince of Wales began its delivery voyage from Glasgow to Rosyth today, 10 weeks ahead of schedule.

As part of the the Queen Elizabeth Class aircraft carrier program, newbuilds HMS Queen Elizabeth and HMS Prince of Wales will be the Royal Navy’s largest and most advanced ever warships and were constructed in blocks in different shipyards throughout the U.K. The final section being delivered, known as the Aft Island, weighs 750 metric tons and will control aircraft operations aboard the second aircraft carrier, HMS Prince of Wales.
Minister of State for Defense Procurement, Philip Dunne MP said, “Our aircraft carriers, the largest ships ever built in Scotland for the Royal Navy, will help to secure the U.K.’s interests both at home and abroad.
“Our new F-35 Lightning II aircraft will fly from the decks of HMS Queen Elizabeth in 2018. This is all made possible by our growing Equipment budget, which has increased to £178billion, ensuring we are providing our men and women with the best equipment possible.”
Iain Stevenson, QE Class Project Director at BAE Systems, said, “There’s more hard work to be done, but there’s also an incredible momentum behind the program as mission systems are tested on HMS Queen Elizabeth and assembly continues for HMS Prince of Wales. HMS Queen Elizabeth is now very much alive and we’re fast approaching the day that she’ll make her first triumphant entry into her Portsmouth home.”
144 wheels, 16 axles and a single remote control were used to drive the Aft Island from the Ship Build Hall in Glasgow onto a seagoing barge for its 1,335 mile journey around the south coast of England.
The Queen Elizabeth Class are the first aircraft carriers in the world to use a twin-island design. The Forward Island contains the bridge and is primarily responsible for the command of the ship. The Aft Island is responsible for the ship’s mission systems and act as an aircraft control tower. While each island has a primary role, both are able to incorporate the other’s role in an emergency, increasing the survivability of the ship.
The Queen Elizabeth Class will be the centerpiece of Britain’s maritime capability. Each 65,000 metric ton aircraft carrier will provide the armed forces with a four acre military operating base, which can be deployed worldwide. The vessels will be versatile enough to be used for operations ranging from supporting war efforts to providing humanitarian aid and disaster relief.
The aircraft carriers HMS Queen Elizabeth and HMS Prince of Wales are being delivered by the Aircraft Carrier Alliance, a partnering relationship between BAE Systems, Thales UK, Babcock and the Ministry of Defense. A national endeavor, at its peak the program directly employed 10,000 people across six build yards. While manufacturing and commissioning is now solely focused in Rosyth, the skilled and diverse workforce is sourced from across the country, including many from BAE Systems in Glasgow and Frimley.