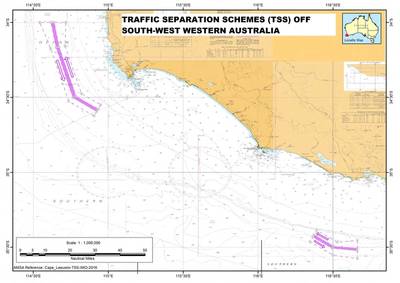 On 1 December 2016 two new Traffic Separation Schemes (TSS) will come into effect off the south-west coast of Western Australia.

Australia’s proposal to establish the schemes was approved by the International Maritime Organization earlier this year and adopted by its Maritime Safety Committee in May.

A TSS separates opposing streams of traffic by establishing traffic lanes and separation zones. The two schemes, off Cape Leeuwin and Chatham Island in the state’s south-west, aim to increase navigational safety by reducing the number of head-on situations and improve environmental protection by keeping ships away from the coast line.

AMSA’s proposal stemmed from shipping traffic data which raised concerns about ships on reciprocal courses and navigating close to the coast line. With around 6,500 unique voyages made through this area every two years (around nine ships per day), the schemes will improve safety. There will be no increase in typical voyage distances for ships traversing the area.

In developing the proposal, AMSA consulted with state and Australian government agencies, representatives of the shipping industry and the Australian Hydrographic Office.

The schemes will be depicted on paper and electronic charts of the region.