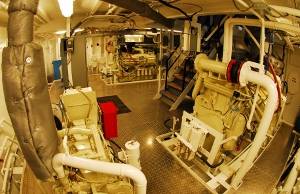 On December 17, 2009, the M/V Lisa Marie departed Hope Services Shipyard to join La Crosse, Wisconsin, based Brennan Marine’s tug fleet. The new towboat was delivered on schedule a common practice for Hope Service’s shipyard that has a five month turnaround on this type of tug classification.

The 72 ft by 30 ft push tug has a 10 ft depth and 29 ft eye height. The three deck vessel is outfitted with two new Tier II type engines carrying a vessel rating of 2000 hp. The M/V Lisa Marie is the second vessel built by Hope for J.F. Brennan this year. This tug was built with extra reinforcement in its push knees and hull and will begin working for Brennan in St. Louis, Mo., on a project building one of the nation’s largest cement plants.