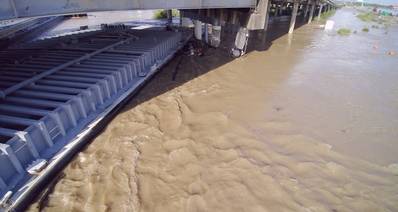 Severe rainfall and flooding from a tropical storm led to barges breaking away from their moorings and striking the Interstate 10 bridge in Channelview, Texas, the National Transportation Safety Board (NTSB) said in a marine accident brief released Tuesday.

On September 19, 2019, 11 barges broke free from a San Jacinto River barge fleeting area north of the I-10 bridge in Channelview during Tropical Storm Imelda, the fifth-wettest tropical cyclone on record in the continental United States. Six barges struck pier columns supporting the I-10 bridge resulting in more than $5.46 million in damages. There were no injuries.

During the storm, San Jacinto River Fleet towboats and crews worked to control the breakaway barges and return them to one of the tiers (designated areas for grouping barges). The vessels could not hold the barges in the rising floodwaters and the barges subsequently struck the I-10 bridge fendering system and pilings. As a result, the westbound bridge was closed for four months and the eastbound bridge did not return to normal capacity until five months after the accident.

The NTSB determined that the San Jacinto River Fleet should have implemented its severe weather plan and taken earlier action to secure the barges in the fleeting area. The NTSB found Cheryl K Marine, operator of the fleet, did not follow their own safety management system policies related to severe weather and swift/flood water plans.

“Marine operating companies should develop and continuously evaluate severe weather plans to prepare for challenges accompanied by tropical storms and/or severe weather with the potential to cause flooding or swift water within the company’s area of operations,” the report said. “Severe weather can trigger prolonged periods of weather restrictions in navigable river watersheds and create challenging conditions due to high or swift water downstream.”