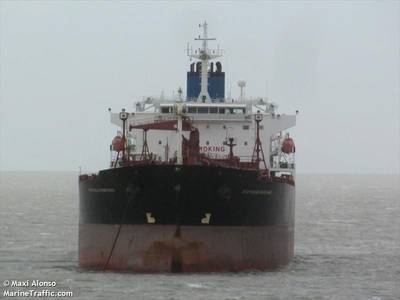 Plagued by mosquitoes at night and marauding monkeys by day, ship captain Glenn Madoginog was held for months at an Indonesian naval base before ending up in a cramped prison cell, sleeping alongside convicted murderers and child rapists.

The Filipino father of four was one of dozens of captains held at the Batam naval base after being arrested for anchoring in Indonesian waters without a permit while waiting to enter Singapore, according to a dozen people involved in the cases, including captains, ship owners, intermediaries and insurers.

Most of the captains were freed after a few weeks once ship owners made unofficial payments to navy intermediaries of between $300,000 and $400,000, the people said.

But Madoginog, 47, says his firm declined so he and his vessel, the 20-year-old Seaways Rubymar oil tanker, remained captive at the base on Batam, an Indonesian island 20 miles (32 km) south of Singapore.

After a six-month wait, Madoginog was sentenced in March to 60 days in jail, his once-proud life as a captain shattered as he ended up in a crowded, cockroach-infested cell.

"The last few months were the worst time of my life," Madoginog told Reuters in his apartment in the capital of the Philippines, Manila, where he returned in May.

"I feel hopeless. I feel ashamed."

U.S. company International Seaways, one of the world's biggest tanker operators and owner of the Seaways Rubymar when it was detained, said it had pursued all legal avenues to get Madoginog and the vessel released.

"As a matter of policy, we do not pay bribes," it said in an emailed response to Reuters, adding that it did all it could to improve Madoginog's conditions while in custody and continued to provide financial and medical support to him and his family.

The Seaways Rubymar has since been scrapped.

Dozens of ships waiting to enter Singapore have been seized over the last year by the Indonesian navy for illegally anchoring in its waters, with most being released after ship owners made unofficial payments, Reuters has reported.

The waters just to the east of Singapore have been used for decades by ships waiting to enter the city-state but the Indonesian navy has cracked down on vessels it says are anchoring in its territory without paying port fees.

The Indonesian navy has said it never requests or receives money to release vessels. Detentions are handled through the courts, or ships are released if there is insufficient evidence to prosecute, a navy spokesman has said.

The navy did not respond to requests for additional comment for this story.

Spokesman Julius Widjojono told Reuters this month, however, that the navy chief was sending an investigation team to Batam, without giving further details or a time frame.

'This is piracy'
The four captains said they believed they had been held for ransom in a well-organized extortion scheme run by navy members, as previously reported by Reuters.

David Ledoux, an American who was captain of the fiber-optic cable-laying ship Reliance when it was arrested last year, said he dodged prison after the vessel's owner made an unofficial payment to free him.

"This is piracy in its simplest form: arrest the ship, arrest the captain, hold the company ransom, collect the money," Ledoux told Reuters in his home in New Bern, North Carolina, also accusing navy members of orchestrating the scheme.

Reuters was unable to determine the amount paid to free the ship, or when the payment was made.

The owner of the Reliance, SubCom, which is an undersea cable company based in the U.S. state of New Jersey, did not respond to requests for comment.

The U.S. embassy in Jakarta told Reuters it was aware of the ship detentions and payments being made to "parties claiming to represent the Indonesian Navy".

"Ships should exercise caution when navigating these waters," a U.S. official said, without addressing further questions.

The alternative to making a payment to intermediaries working on behalf of the navy is to wait for cases to go to court, leaving ships idle for months and potentially costing owners far more in lost revenue for vessels they can lease for tens of thousands of dollars a day.

Ledoux, 57, questioned why more wasn't being done by ship owners and governments to raise awareness of the issue.

The International Maritime Organization (IMO), a U.N. agency responsible for shipping security and safety, said it investigates matters raised by its members and it had yet to receive a request to look into this issue.

International waters
The area where ships were detained is more than 12 nautical miles (22 km) from the main Indonesian coastline, the standard distance considered to be in international waters under the United Nations Convention on the Law of the Sea.

The Reliance and the Seaways Rubymar were anchored in the area, known as East OPL (outside port limits), the captains said.

However, Indonesia is a sprawling archipelago of over 17,000 islands and territorial waters can be drawn around uninhabited islands or drying reefs which could mean captains believe, incorrectly, they are in international waters, ship insurers and a maritime lawyer said.

"That's why people have been caught out," said Stephen Askins, a maritime lawyer in London.

Ledoux said, however, that he had been told where to anchor by SubCom's agent in Singapore, Ben Line. Madoginog said his anchorage position had been approved by V-Ships, the London-based company managing his tanker, without providing evidence.

Ben Line denied any allegations of wrongdoing, without addressing questions about the anchorage. V-Ships did not respond to a request for comment.

Ledoux and most captains detained by the navy were released within a few weeks after ship owners made a payment, the 12 people involved in the transactions told Reuters.

When Ledoux was released on Oct. 28, he sailed the Reliance to Singapore for maintenance.

Once the repairs were complete, he was called by SubCom's director of fleet operations, Scott Winfield, saying his tone had shifted from compassionate to hostile.

"He said, 'upper management wants some ass, and it's going to be yours', so you're going to be demoted," said Ledoux, who lost his temper and resigned.

Winfield and SubCom did not respond to requests for comment.

Madoginog said he was detained on Sept. 16 last year in a dawn raid by naval officers. He said they told him to sail to Batam and come onshore to sign port clearance papers - and that it would only take a couple of hours.

When he arrived, he was put in a dark, sweltering room by the officers, with only an uncovered bed and a filthy squat toilet. One officer asked for the phone number of his ship's owners and left.

"There were no pillows, no linens, no air conditioning, no fans, nothing," said Madoginog, adding that at one point he counted 27 other captains in similar rooms.

Madoginog and Ledoux struck up a friendship, washing clothes and burning trash together in the yard outside their rooms, keeping an eye out for long-tailed macaques ready to charge at anyone with food.

'They left me behind'
Buana Saka Samudera, the Indonesian agent for International Seaways, provided Madoginog with food, bedding and an air conditioning unit for his room on the base and eventually got him his own cell and better food in prison, he said.

Buana Saka Samudera did not respond to requests for comment.

Madoginog said he is not currently working and is receiving treatment for depression following his ordeal.

Other captains also had their rooms on the Batam base upgraded by local agents paid by shipowners, they told Reuters. After captains were released, navy personnel sometimes moved into the refurbished quarters, Madoginog and Ledoux said.

Madoginog said he remained on the base until mid-November, when navy officials sent him and the other captains back to their ships after a Reuters article about the arrests.

An Indonesian navy spokesman did not respond to a request for comment.

Madoginog stayed on his ship by the Batam base until he was convicted in March of illegal anchorage and sentenced to two months in jail, court documents show.

He says he didn't understand what the prosecutor, judge or his interpreter were saying and wasn't able to give evidence at several court hearings.

Reuters has not seen what evidence was presented at the trial to prove the ship was in Indonesian waters.

Batam District Court spokesman Edy Sameaputty said the trial was conducted according to the relevant criminal law and that Madoginog had been given the right to a defence.

By the time he got out of jail, Madoginog's ship and crew were gone and no one from the company was there to meet him.

"They left me behind," he said.