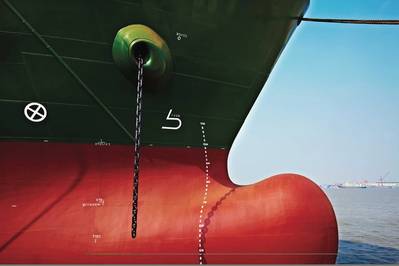 While owners have long recognized the link between clean hulls and lower fuel costs, lack of reliable data has slowed investments in optimizing hull performance. But with improved sensor technologies and data analysis tools, hull performance is getting a second look.

Owners seeking to lower fuel costs and comply with pending regulations on emissions and invasive species often look to equipment manufacturers to meet their needs. From new efficient engine designs to alternative fuels, scrubbers to ballast water treatments systems, owners face some expensive decisions. But with more vessels now equipped with onboard sensors and standardized tools to measure speed loss due to hull fouling, owners and fleet managers now have access to reliable data measuring the impact of hull and propeller performance over time.

10-year Statistics
According to Manolis Levantis, Jotun Marine Analyst Manager, Jotun Marine has collected data on hull performance from different types of vessels on different trades for more than decade. “Jotun’s Hull Performance Solutions requires participating vessels to install sensors to enable performance monitoring based on standardized principles (ISO 19030) for the measurement of changes in hull and propeller performance,” he said.

“Since then, the company has amassed one of the industry’s most comprehensive data sets on hull performance.”
Levantis says that hull and propeller performance have a much larger impact on vessel efficiency than previously thought. “We estimate that the average yearly speed loss for all vessel types and trades, regardless of what anti-fouling is used, is about six percent,” he says. “For a typical bulk carrier, compensating for this speed loss would require an increase of power of up to 18 per cent, resulting in higher fuel costs and GHG emissions.”

Levantis is careful to note that Jotun’s data is taken from owners and fleet managers who are committed to improving hull performance. “When you consider that low freight rates over the past five years have discouraged many owners from investing in premium anti-foulings or sensor technologies, the market speed loss average may exceed six per cent.”

While Jotun does not usually share customer data, the company worked in cooperation with Gearbulk in 2016 to measure hull performance. GearBulk, which operates the world’s largest fleet of open hatch gantry and semi-open jib craned vessels, shared historical performance data from the cargo ship Penguin Arrow dating from January 2000, allowing for a full comparative analysis.

After installing sensors and applying Jotun’s premium anti-fouling, (SeaQuantum x200), Jotun was able to monitor speed loss over a 60-month period. The results indicated a speed loss of just 0.5 percent, resulting in an estimated fuel savings of $1.5 million and a corresponding reduction of CO₂ emissions of 12,055 tonnes.

“Our data conclusively proves the link between hull performance and fuel efficiency,” said Levantis. “And with the IMO’s pledged to reduce the total annual GHG emissions by at least 50 percent by 2050 compared to 2008, we believe hull performance will play a greater role in helping owners and fleet managers comply with pending regulations.”

The Cost of Fouling
According to the Clean Shipping Coalition, the only international environmental organization that focuses exclusively on shipping issues, poor hull and propeller performance accounts for around 10 percent of the world fleet’s energy consumption, translating to about $30 billion in additional fuel costs for the world fleet, every year. Burning this fuel adds 0.3 percent to shipping’s total greenhouse gas output, which, according to the IMO, is about 2.2 percent of the world’s total – about the same output as Germany.

Failure to prioritize hull performance not only result in additional fuel costs, but also may expose owners to claims related to charter party agreements or additional costs for periodic underwater hull cleanings. At the same time, port authorities in Australia, New Zealand, California and the EU have become increasingly sensitive to biofouling risk, placing new requirements on owners.

Next-gen Hull Maintenance
While new anti-fouling technologies have drastically reduced speed loss between drydockings and more ports are offering advanced ROV hull cleaning services, pending regulations on emissions and invasive species will require a more proactive approach to hull maintenance. Increasingly, owners are seeking solutions to manage hull performance more effectively between dry dockings, when fouling occurs. After all, removing slime before marine organisms can attach to the hull would not only improve vessel efficiency and lower GHG emissions, but also help control the spread of invasive species.

“The industry now has access to historical data that makes a strong business case for optimising hull performance,” says Levantis. “As an analyst, I believe what can be measured can be managed – we don’t have to guess anymore.”