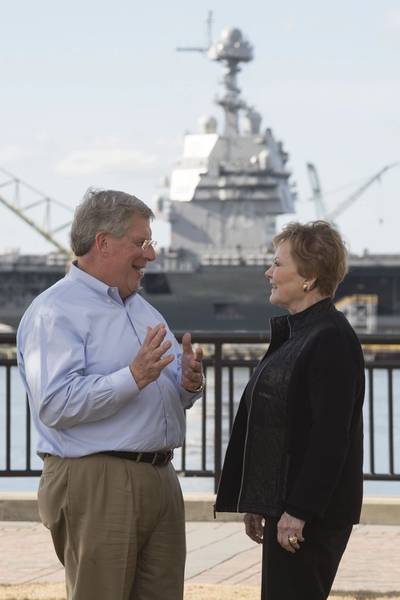 Newport News Shipbuilding President Matt Mulherin accompanied the congresswoman on the shipyard tour, which included progress updates on the aircraft carriers Gerald R. Ford (CVN 78) and John F. Kennedy (CVN 79), as well as the USS Abraham Lincoln (CVN 72) refueling complex overhaul and the Enterprise (CVN 65) inactivation. Granger also learned about Newport News’ role in the Virginia- and Columbia-class submarine programs.
“The exceptional shipbuilders at Newport News are vital to building our Navy’s future fleet,” Granger said. “It is their skill and expertise that ensures our nation’s nuclear shipbuilding enterprise delivers what is needed to support our national defense. In addition, I am pleased by the shipyard’s efforts to control costs on these complex warships because we must increase the size of our Navy in these dangerous times. This shipyard and other advanced American manufacturers across the country are absolutely critical to keeping us safe.”
Granger serves as chairwoman of the House Appropriations Committee’s Defense Subcommittee, which provides funding for all of the Navy’s shipbuilding, ship maintenance, and research and development programs each year. On appropriations, she is also a member of the State & Foreign Operations and Energy & Water subcommittees. Granger has received numerous awards for her support of national defense issues and is the first and only Republican woman to represent Texas in the U.S. House of Representatives.
“Congressional visits are invaluable,” Mulherin said. “They provide our nation’s decision-makers with the opportunity to see and experience the complexities of our ships, our business and more importantly, they provide us an opportunity to recognize the many shipbuilders and suppliers from across the country who contribute toward their construction. Congresswoman Granger’s commitment to the readiness of our military is clear, and we appreciate her support and her hard work toward stabilizing the defense budget.”