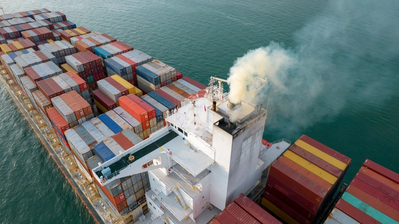 Shipping companies are still waiting for "real green" fuel solutions as part of decarbonization efforts to clean up the industry, a leading industry official said.

Shipping, which transports around 90% of world trade and accounts for nearly 3% of the world's CO2 emissions, is under growing pressure from environmentalists to deliver more concrete action, including a carbon levy.

"We are still awaiting engine and shipbuilders to come up with real green solutions," Haralambos Fafalios, chairman of the Greek Shipping Co-operation Committee (GSCC), said in a speech at an annual event in London this week.

"We need a simple incentive, such as a fuel levy as a medium-term measure until safe alternative fuels become available in the long term."

The industry has been testing a number of cleaner fuel options, including ammonia and methanol, as well as trialing wind sails, in an effort to look for new solutions away from dirtier bunker fuel.

Fafalios said many companies, whether in shipping or commodity traders, "are touting the strengths of their favourite fuels, but none so far have a real green footprint on a well-to-wake basis".

Well-to-wake refers to the measurement of emissions from fuel production to fuel consumption onboard a ship.

Fafalios said "none of these alternative green, zero or low carbon fuels yet have a global bunkering or cost infrastructure to support the world fleet".

"Ammonia, for example, is at present a very dangerous fuel, and not enough safety measures have been put into place to make it a realistic option."

The London-based GSCC is one of the leading bodies representing Greek shipping, which is among the world's biggest shipowners.