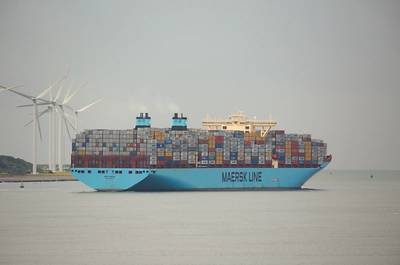 Container shipping giant A.P. Moller-Maersk now plans to achieve net zero emissions in its business by 2040, a decade earlier than previously announced, on the back of rising customer demand for green transportation and technical leaps.

With about 90% of world trade transported by sea, global shipping accounts for nearly 3% of the world's CO2 emissions, and the sector is under growing scrutiny to become cleaner.

"When we set the target back in 2018, it was truly a moon shot target, where truth be told we really didn't have a lot of very specific plans," Maersk's Chief Executive of Fleet and Strategic Brands Henriette Hallberg Thygesen told Reuters.

But since then the industry has seen technological advances on the vessel side in tandem with increasing demand for carbon-neutral supply chains from big corporates such as Amazon and IKEA. Maersk set a 2030 interim target for a 50% reduction in emissions per transported container, and a 70% cut in absolute emissions from fully controlled terminals.

It said the targets would now cover its entire business, including indirect emissions, and not only its vessels. The company, which has so far ordered twelve vessels able to run on carbon-neutral methanol, said it aims to transport a quarter of its seaborne freight using greener fuels in 2030.

Supply of greener fuels remains one of the main challenges, Thygesen said, adding that Maersk is in dialogue with suppliers but declining to provide more detail.

Such fuels currently cost more than twice as much as conventional ones, but Maersk's customers are to a high degree willing to shoulder the increased price, according to Thygesen.

"The increase in cost per product is still relatively insignificant," she said.

Maersk's targets are approved by the Science-Based Targets Initiative, an independent body that checks goals are robust.

The group is also actively lobbying the United Nations' shipping agency, the International Maritime Organization, for a global carbon levy on shipping fuels to ensure that zero and low carbon fuels become economically viable and competitive to fossil fuels.

On January 6, the Federal Maritime Commission announced an “Order of Investigation and Hearing” against Wan Hai Lines, Ltd…