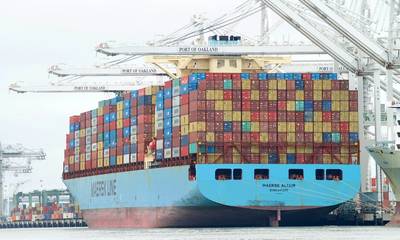 Shipping giants are heading for port, but not in the traditional sense. Companies like Denmark’s A.P. Moller-Maersk and Germany’s Hapag-Lloyd are riding a record valuation wave thanks to a year of sky-high container rates. Gobbling up land-based logistics rivals would be one use for the cash burning a hole in their pockets. It would also serve as a handy buffer against future supply-chain crunches.

Pandemic upheaval has benefitted the shipping industry. Government support, such as checks mailed out to U.S. households, fueled a consumer spending spree. Freight rates have soared. In September, a container from China to New York cost $22,000, eight times its 2019 price. That has boosted shipping firms’ bottom lines. Market leader Maersk’s EBITDA will nearly treble in 2021 to over $23 billion, according to analyst estimates compiled by Refinitiv. The firm, which the market valued at $59 billion in mid-December, is likely to be carrying over $17 billion of net cash in 2022.

The normal response would be for chief executives like Maersk’s Soren Skou to splash out on ever bigger boats. Yet March’s blockage of the Suez Canal shows the dangers of excessive bulk. And the arrival of lots of new vessels in three or four years may overwhelm demand for container space, cratering freight prices and shipping company margins.

A smarter move may be to invest in getting containers seamlessly from port to customer. Danish shipping and freight specialist DSV bought the logistics unit of Kuwait’s Agility Public Warehousing in April for $4.1 billion for just such a reason. France’s CMA CGM and Maersk both pulled similar moves in December read more . At $51 billion, DSV is too big even for Maersk. Switzerland’s Kuehne und Nagel, at $34 billion, would also be a challenge. However, its shares shed 25% in September and October as freight rates eased. If those trends continue, the company could come into play in 2022. U.S. land-transport specialist CH Robinson Worldwide, now worth $13 billion, would be another option.

Bringing sea and land services under one roof would allow for cost savings. It would also make it easier for operators to plot a course through future supply-chain bottlenecks and charge a premium for speedier delivery. Danish wind turbine giant Vestas Wind Systems, which has struggled to get parts throughout 2021, signed just such a deal with Maersk in November. In 2022, there are a lot of incentives for sailors to step ashore.