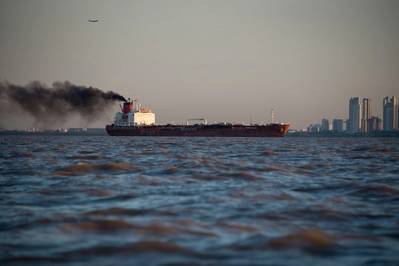 Leading shipping associations have proposed creating a global levy on carbon emissions from ships to help speed up the industry's efforts to go greener.

With about 90% of world trade transported by sea, global shipping accounts for nearly 3% of the world's CO2 emissions and the sector is under growing pressure to get cleaner.

For the first time, the International Chamber of Shipping (ICS) and Intercargo jointly proposed a levy based on mandatory contributions by ships trading globally, exceeding 5,000 gross tonnage, for each tonne of CO2 emitted.

The money collected would go into a climate fund that would be used to deploy bunkering infrastructure in ports around the world to supply cleaner fuels such as hydrogen and ammonia, according to the proposal.

"What shipping needs is a truly global market-based measure like this that will reduce the price gap between zero-carbon fuels and conventional fuels," ICS Secretary General Guy Platten said.

The proposal was submitted on Friday to the UN's shipping agency, the International Maritime Organization (IMO).

An IMO spokesperson said all proposals were welcome and would be up for discussion later this year, adding that "proposals on market-based measures are in line with the initial IMO GHG (greenhouse gas) strategy".

The IMO will hold an intersessional working group meeting scheduled for late October, ahead of a late-November session of the Marine Environment Protection Committee, which will address issues including carbon-reduction efforts.

The European Commission in July proposed adding shipping to the bloc's carbon market, targeting an industry that had for more than a decade avoided the EU's system of pollution charges.

The ICS said "piecemeal" approaches such as the EU's proposal would significantly complicate "the conduct of maritime trade". (Reporting by Jonathan Saul; Editing by Steve Orlofsky)