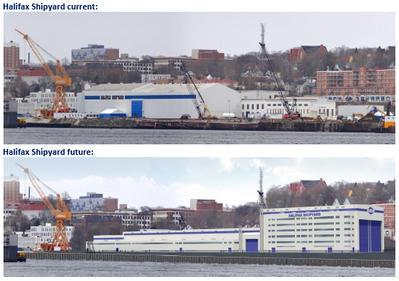 Irving Shipbuilding announced several contract awards today for Nova Scotia and Canadian suppliers as part of part of the Halifax Shipyard Modernization Program, a two-year engineering and construction investment to prepare the company’s facilities to build Canada's future combatant ships. Site preparation and preliminary construction is well underway, with major demolition and construction to begin soon. To date a total value of $127.7 million in contracts have been awarded.

“Irving Shipbuilding will invest approximately $300 million in the Halifax Shipyard Modernization Program, which is designed to ensure our facilities are ready to undertake production of the AOPS vessels scheduled to start in 2015, as well as the larger combatant ship contract currently scheduled to begin production between 2020 and 2022.” said Jim Irving, Co-CEO, J.D. Irving, Limited. “The selection of suppliers for our Modernization Program is the result of a rigorous procurement process where we assess quality, reliability, experience and cost to select the company that will help us deliver the best value to Canada.”

“Jobs, growth and long-term prosperity: that’s our government’s pledge to Canadians, and our shipbuilding strategy is an important part of how we’re delivering on that promise,” said The Honorable Diane Finley, Minister of Public Works and Government Services Canada. “We made the decision to build these ships right here at home and create over 15,000 jobs across the country – and infuse $2 billion in annual economic benefits to Canada over the next 30 years. Investments, like the Halifax Shipyard Modernization Program, will create jobs and long term economic benefits in Nova Scotia and across the country.”

"One of the greatest moments of my time as Defense Minister was the opportunity to see the excellence of Nova Scotia's shipyard workers shine through and become apparent to Canada,” said The Honorable Peter MacKay, Minister of Justice and Attorney General of Canada and Regional Minister for Nova Scotia. “Through our Government's merit-based process, the skill, dedication, and commitment of the men and women of Halifax Shipyard has resulted in this shipyard being selected to rebuild the Royal Canadian Navy’s combat fleet. I am proud to say that politics had nothing to do with it—the hard work and ability of these workers did.”

Upon completion, the modernization project will result in one of the most modern shipyards in North America. The yard designs have been reviewed and benchmarked against international best practices by independent third party First Marine International, to ensure the updated facilities meet the target state measures established in the NSPS procurement process.

Based on an economic impact assessment prepared by Jupia Consultants Inc., the total $300 million Yard Modernization investment is expected to boost Canadian gross domestic product (GDP) by $235 million, create approximately 1,720 full time equivalent (FTE) positions across Canada (direct with our suppliers and indirect with their subcontractors) and generate $136 million worth of employment income in the country over the two-year period. It will also lead to more than $102 million worth of consumer spending. In addition, the economic activity is expected to provide approximately $50 million worth of taxes for federal, provincial and local governments over the two year period.

“Throughout the NSPS contracts, as well as the preparations leading up to them, we are committed to maximizing opportunities and benefits for Canadians and Nova Scotians through subcontracting, employment and the generation of investment and benefits within the broader marine industry,” added Jim Irving.