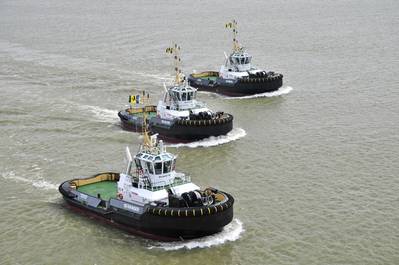 KOTUG will shortly be putting three Damen ASD 2810 tugs into operation. These tugs were ordered by Elizabeth Ltd. in Malta and are being chartered by KOTUG, both part of the Kooren Maritime Services Group (KMS). Two tugs are being used in the port of Rotterdam, and the third will see service in the port of Hamburg. It’s the first time that Damen Shipyards has built tugs for the KMS Group.

Damen Shipyards and KOTUG have built up a good relationship over the years.

“We have long known Damen as a repair yard, and now we know it as a shipyard as well,” said Ard-Jan Kooren, CEO of KOTUG. “This is the first time we have teamed up with Damen on a new build project. Damen has a top-quality portfolio. We needed additional tugs quickly to replace a number of older tugs, which we had sold, and Damen had them in stock. Within two weeks, we had our tugs. The short delivery time and the quality were the key factors which persuaded us to invest in three tugs at the same time.”

KOTUG has offices in Rotterdam, Hamburg and Bremerhaven and is represented in the UK, Norway, Australia and Brazil. With a fleet of 30 tugs, KOTUG operates in a variety of markets, including tug work in port and at sea, and the salvage, offshore and dredging industries. Just like Damen, KOTUG has an ongoing R&D program. The main result of this is the Rotor® Tug concept, based on a configuration of three propulsion units, which create a high degree of manoeuvrability. In addition, KOTUG recently launched its E-KOTUG, the ‘RT Adriaan’, the world’s first hybrid Rotor® Tug.