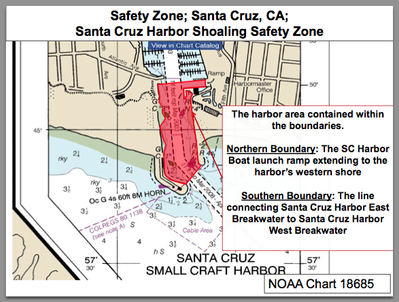 The U.S. Coast Guard informs it has established a safety zone for the entrance of the Santa Cruz small craft harbor effective Friday, March 18, until Sunday, May 1, or upon the completion of emergency dredging as announced via broadcast notice to mariners.

Due to the extreme shoaling that is occurring as a result of the El Nino season, the Coast Guard, in conjunction with the Santa Cruz Harbormaster, determined that shoaling at the entrance to the harbor has made it unsafe for many vessels to transit, particularly during high surf or extreme tides. At this time the dynamic movement of the shoals, which is a build-up of sand and/or mud within the channel, has caused erratic and drastic changes in depth that are not consistent with charted depths. The resulting hazardous conditions may cause vessels to run aground or to capsize due to breaking waves.