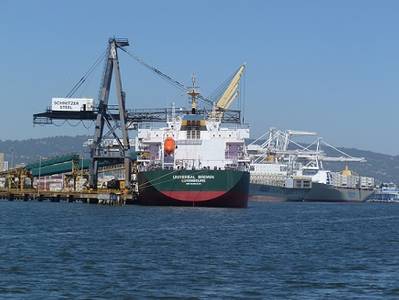 Import volume at the nation’s major retail container ports is expected to increase 3.3% in May over the same month last year but growth could trickle to a standstill by the end of the summer, according to the monthly Global Port Tracker report released today by the National Retail Federation and Hackett Associates.

“The weak cargo increases expected over the next few months are consistent with other signs that the economy is slowly improving but show that retailers remain cautious, especially when it comes to stocking their inventories,” NRF Vice President for Supply Chain and Customs Policy Jonathan Gold said. “We’re looking at barely 1% of year-over-year growth through the early summer, and August and September are expected to be basically flat even though they’re supposed to be two of the busiest months of the years.”

“With consumer confidence low, employment struggling to recover and less money in shoppers’ pockets because of the payroll tax hike, we need to see action from Washington that will provide some fiscal certainty for families and businesses alike,” Gold said.

Cargo import numbers do not correlate directly with retail sales or employment because they count only the number of cargo containers brought into the country, not the value of the merchandise inside them. But the amount of merchandise imported nonetheless provides a rough barometer of retailers’ expectations.

U.S. ports followed by Global Port Tracker handled 1.14 million Twenty-foot Equivalent Units in March, the latest month for which after-the-fact numbers are available. That was down 10.9% from February and 8.6% from March 2012. One TEU is one 20-foot cargo container or its equivalent.

“Despite the Fed pumping liquidity into the market, consumer confidence still has not turned the corner,” Hackett Associates Founder Ben Hackett said. “We need to see the economy strengthen in the coming quarters before we can begin to see the threat of a further economic downturn dissipating. Trade will remain at low growth levels until we reach this stage.”