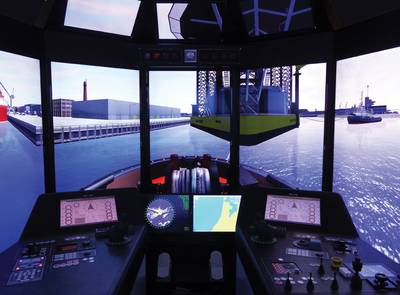 During a ceremony on June 3, the new 360-Control Tug & OSV Training Center was officially opened for the general public and customers. The simulators for the training center are delivered and installed by VSTEP.

The high-tech training center is a project of 360-Control, a joint venture between Iskes Towage & Salvage and Damen Shipyards and is located at the port entrance of the Amsterdam North sea canal.

The VSTEP simulators delivered include a 360-degree NAUTIS Full Mission Tug Simulator and a 240-degree NAUTIS Desktop Trainer to allow realistic training of tug and OSV handling and manoeuvring. To allow training of complete exercise scenarios using a vessel and two tugs (one at the stern and one at the bow) these Tug and OSV simulators will be expanded with another 360-degree NAUTIS Full Mission Tug Simulator at a later stage. A NAUTIS Instructor Station was installed to provide total instructor control during exercises.

The 360-Control training center is set to become a center of excellence for tug and offshore training in the region by combining the expertise of industry leaders Damen and Iskes with advanced next gen simulators.