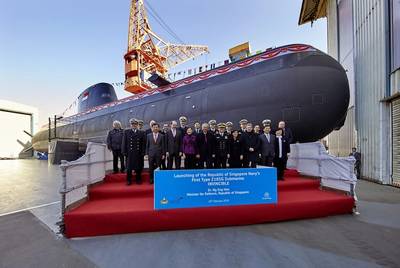 ThyssenKrupp Marine Systems (TKMS) has launched at the Kiel shipyard the the largest ever built in Germany submarine. Named Invincible, the submarine will be part of the ongoing submarine program in the Republic of Singapore.

Prof. Ivy Ng, wife of Dr. Ng Eng Hen, Minister for Defense of the Republic of Singapore, named the boat in the presence of high-level representatives from the Singapore government and Navy, as well as high-ranking German officials.

Dr. Ng Eng Hen, Minister of Defense for the Republic of Singapore: "These new submarines are the products of years of experience and deep expertise from both Germany and Singapore. They are a testament to our warm and growing defense ties with Germany. Closely collaborating with our Defence Science and Technology Agency (DSTA), the RSN oversaw the design of the submarines, before jointly developing them with Thyssenkrupp Marine Systems. I am heartened by the cooperation and efforts of the Singaporean and German industries."

Dr. Rolf Wirtz, CEO of Thyssenkrupp Marine Systems: "We are proud to be able to take this important step in the life of a boat together with our Singaporean partners. This first boat of the Type 218SG will mark a next generation of submarines. They will possess an extensive range of vital capabilities and therewith become a highly capable strategic asset for Singapore and its Navy."

The boats have the design of a low-signature submarine with air independent propulsion – enabling them to stay submerged for a longer period – and numerous tailor-made solutions and new technologies.

DSTA and Thyssenkrupp Marine Systems dive into additive manufacturing for submarines Prior to the launch of the Republic of Singapore Navy's first Invincible-class submarine, Singapore's Defense Science and Technology Agency (DSTA) and Thyssenkrupp Marine Systems signed a Memorandum of Understanding (MOU) in Kiel to collaborate on new technologies such as additive manufacturing and data analytics for naval applications.

Under the agreement, DSTA and Thyssenkrupp Marine Systems will explore the use of additive manufacturing as an innovative, cost-effective method for producing submarine spare parts. Both parties will work together on the design, engineering, and qualification of additive manufactured components, which could be tested and trialed on Singapore submarines.

Tan Peng Yam, Chief Executive of DSTA: "In this age of rapid change, collaboration is key to exploit novel technologies. We are excited to combine our expertise with Thyssenkrupp Marine Systems in additive manufacturing."

Dr Rolf Wirtz, CEO of Thyssenkrupp Marine Systems: "This initiative is a prime example of our understanding of innovation: We are engineering. tomorrow. together. The MOU allows us to test parts manufactured in Kiel with additive manufacturing under real conditions. This is a great asset for us."